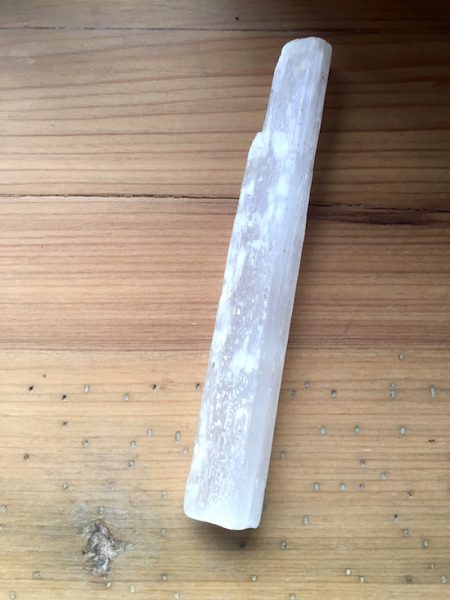 In 2015 I was having trouble with my writing — as in it was stuck inside of me, clinging to my insides like some grimy, salty barnacle, unwilling to relinquish its grip. Imagine if your words turned into organic matter and were in an act of revolt, and you will see me, in New York City, sweating in the summertime, drinking rosé by the gallon, believing that somehow I would survive this on my own.

My writer friend Karolina, newly exited to Los Angeles, sensed my distress. She had had similar turmoil in her life. We messaged about it practically every day. Finally, she mailed me a package. It contained a stick of white sage — which I lit and swung furiously about my house and flesh like a lunatic — and a piece of long, milky crystal called Selenite. The crystal reminded me instantly of Superman’s Fortress of Solitude, which felt appropriate and comforting. I Googled it: Selenite is supposed to enhance mental clarity.

I placed the crystal on my desk. I contemplated it. I would occasionally pick it up and rub its slightly silky texture with my thumb. I did not write right away, but I felt better knowing it was there, this outside object newly introduced into my life, the possibility of a new facet to my writing ritual, the witnessing of this crystal sent from afar.

A month later I arrived at a writing residency in upstate New York. The crystal came with me. I wrote ninety pages in three weeks. Now it comes with me whenever I am going to spend an extended amount of time somewhere, and it lives in whatever writing space I adopt.

I acknowledge that I existed as a writer before this crystal came along, and I will exist as a writer long after this crystal gets lost in a move or shoved in a desk drawer. But for now I will treasure it, because it was there when I needed it, just as my friend was there for me, offering me a small bit of life force in the continuing struggle to live and thrive and make art.

See All Posts by Jami Attenberg

Jami Attenberg is the author of six novels, including The Middlesteins and her latest, All Grown Up.