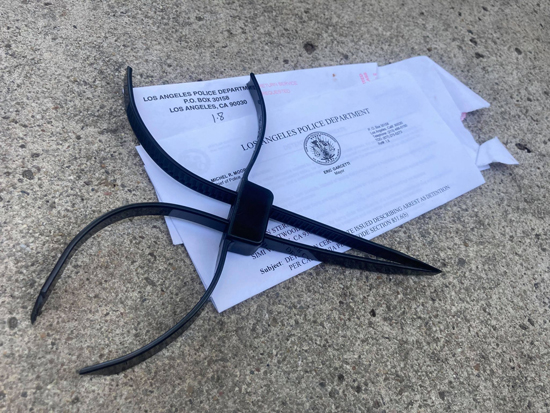 SOUVENIR OF THE LAPD

After the racist murder of George Floyd by Minneapolis police in the summer of 2020, protests erupted nationwide. It was an incendiary situation, and I ended up getting arrested twice in Los Angeles within 3 days.

On May 29th near city hall, I was separated from half a dozen friends during a standoff. There were probably 1,000 of us surrounded on three sides by police. In the crowd were people of all backgrounds; lawyers, nurses, students, less privileged individuals. There was a barricade.

Most people didn’t see the mass arrest coming. A contingent of LA skater street kids, who seemed to have had previous experiences with police brutality, began pushing the barricade back in an attempt to knock it over and possibly escape the police lines that were on the other three sides. A group of protest organizers intervened and made the kids stop.

Soon after that, a fourth police line formed behind the barricade. We were now surrounded. There was no dispersal order but I already knew we were all getting arrested. I saw many young urban professionals saying there was no way we were getting arrested, safety in numbers. A couple hours passed and we were still surrounded. The police told us to quiet down every 20 minutes or so. We were eventually all told to sit down. Not everyone could hear the orders.

One by one we were made to stand up and face the crowd and then handcuffed with zip ties. We were waiting on jail buses for hours while they finished this process. They transported us to a nearby jail downtown where we were all cited for a misdemeanor, “failure to obey a police order,” and released.

The zip ties hurt. The scene on the bus was wild. People were amped. Someone on the bus I was on was able to get their zip ties off. He then removed them for everyone whose zip ties weren’t so tight that they could only be cut off. Everyone who had zip ties removed put them back on loosely when the bus stopped. I recognized numerous activists I had known over the years at the jail, it was a surreal setting. I am used to open mics, and here we all are in jail amidst the pandemic.

On June 1st, I went to attend another protest for the same cause in Hollywood. As I arrived on Sunset Blvd. with two friends, people were already running. Although I figured it was time to run as well, my friends didn’t want to. We were immediately surrounded and lined up against a wall. This time it was probably 100 of us. The process was very slow again. They searched us and we overheard them finding buses and a jail that would take us all. This time they transported us 20 miles to Harbor Jail in San Pedro, where we were cited for breaking curfew. Pandemic things.

We were released at 3am and I hitched a ride with my friends to a house in South Central. My car was parked on the street in Hollywood. I woke up and took half a dozen buses to get back. Luckily parking enforcement was not in effect thanks to the pandemic.

Marlon Stern Lopez is the Salvadoran and Jewish product of suburban Los Angeles. 4th generation LA through the Stern side. Handyman extraordinaire. Folk musician, casual visual artist and general rabble rouser. Just trying to hang in there through the madness with all y’all.