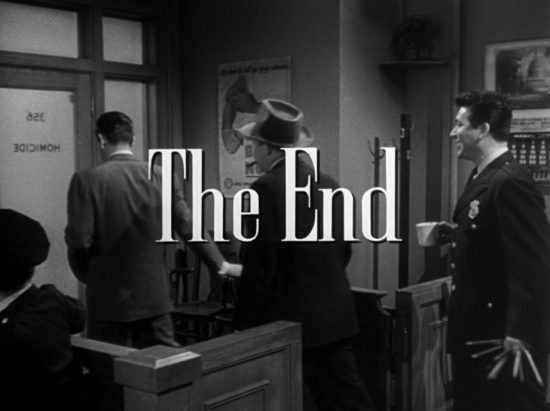 Sometimes a pot of coffee is just a pot of coffee, Dr. Sigmund might have said, cautioning against reading everything in a symbolic way. But he hadn’t seen 1953’s The Big Heat, made soon after the incendiary Kefauver Hearings on organized crime and in the midst of the inflamed McCarthy investigation of Communism. Herein, German émigré filmmaker Fritz Lang’s boiling cauldron of java is the central image of a nightmare America fueled by anger and revenge. “The Big Heat” is the A-bomb-implosive USA.

The coffee appears 48 minutes into the film in the corner of the frame, discreetly bubbling away, while a coven of hoodlums in front are absorbed in a poker game. One of them, Vince Stone (Lee Marvin), an abusive hothead, becomes connected to that coffee as a signatory of his character and his weapon of choice. When his girlfriend, Debby (Gloria Grahame), slips into the apartment, he becomes enraged that she might be stepping out on him. CLOSE ON the boiling coffee. An off-screen scream, and then CUT to Debby running wild, holding her scalded, blistered face. CUT to Vince, standing in a doorway, unfazed by his brutal act. The cauldron, half full of coffee, now is clutched in his fist. He owns it. That’s him. 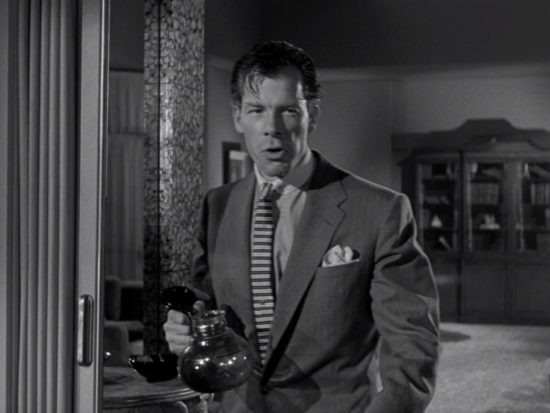 Vince is The Big Heat’s obvious bad guy, but, in a film of conscious doubling by Lang, the movie’s good guy, an honest cop, Dave O’Bannion (Glenn Ford), also has severe anger issues. His lovely and adoring wife gets blown up by the mob when she detonates a bomb meant for her husband. From that moment, swearing to revenge her death, Dave turns into his doppelganger, a virtual Vince, sadistically punching and choking people, cruelly shoving women whom he considers heinous, and, when he intersects with the injured Debby, not caring about her wounds any more than Vince does. A bit of formulaic Hollywood: Dave recovers his humanity by becoming tender to Debby and not shooting Vince when he could. Ending his vigilante period, he turns Vince in to the cops. And he rejoins the police force, though earlier he’d furiously tossed off his badge.

And Dave and coffee? We’ve seen him drink beer at home and scotch in a hotel room. Only in the last scene of the movie, back at his police desk, does he shout to an underling, “How about some coffee, Hugo?” As Hugo scurries off, Dave is called to a case, and leaps from his desk. In the very last shot of The Big Heat, with The End overlapping the image and the sound, there is Hugo with the cup of coffee, Dave not drinking it but scurrying out of the office, ordering, “Keep that coffee hot, Hugo.” What does that mean? That coffee is just coffee, having lost its symbolic edge? Or, more likely for cynical Fritz Lang, Dave O’Bannion and America are incurable. They stay afire. The Big Heat boils on.

See All Posts by Gerald Peary

Gerald Peary is a long-time film critic for the late Boston Phoenix and now for The Arts Fuse. He’s the programmer of the Boston University Cinematheque and the filmmaker of three feature documentaries: For the Love of Movies: the Story of American Film Criticism, Archie’s Betty, and The Rabbi Goes West, the last co-directed by his wife, Amy Geller. He acted in the indie “cult” movie, Computer Chess.