I have never met anyone who shared my first name, but there was this band called Kembrew. They only played a couple dozen gigs, including their Simi Valley, California high school talent show (they didn’t win), and then broke up in 2005. No Grammy nominations looming on the horizon for Kembrew, a name they adopted after stumbling across my personal website.

Musically, they mined what I would call a stoopid aesthetic. Just check the song titles: “Emancipation Rocklamation,” “Ninja Rock Machine,” “Wanna Hear a Joke? My Life,” and the whimsically dark ditty, “Grandpa” (“Grandpa’s in a coma / poke him with a stick! / poke him with a stick! / Grandpa’s in a coma / write on his face! / write on his face!”).

These two high schoolers — Alex Martinez, aka Kembrew Jones, and Michael Weiss, aka Mike Danger — formed their band back in 2003, recorded two independently released albums, and then lapsed further into obscurity. You Should Buy This Album, their second, inexplicably remains on iTunes, Spotify, and other streaming services. More importantly, they printed a bunch of merch (stickers, t-shirts, buttons, and other flair), some of which I purchased years ago from their now-defunct website, kembrewrock.com.

Most of these items have been lost, sadly, but I still have a couple band shirts emblazoned with the phrase Kembrew: Straight Thuggin’. I feel a bit megalomaniacal wearing them, and also don’t want to come off as a slang-appropriating hipster, so for the most part these t-shirts remain at the bottom of my dresser drawers. But when I do wear one, it can provoke interesting interactions, like this time when I flew from New York City to Iowa City.

After passing through the metal detector, a curious TSA agent asked me, “So, what is a Kembrew?” This query caught me off -guard, until I realized what I was wearing. “Oh, welllll,” I said, “it’s a long story, but, um, like…,” and then quickly explained. As a nerdy white professor, I had been oblivious to the fact that I was walking around New York with the words Straight Thuggin’ on my chest. (What was I thinking?)

By this point, the African American TSA agent was laughing at me — not with me. “Yeah, I was afraid you really were straight thuggin’,” he deadpanned, “and I didn’t know if I should let you through security with that shirt.” As I put my shoes back on, he asked one last question. “So, where you going?” I cringed and blushed. “Well, I’m actually going back to Iowa, and we’re not really very thuggin’ there.”

“But compared to most of ’em,” I said about myself, too generously, “I’m totally straight thuggin’.” He just kept laughing. “Yo, I’m scared. I don’t ever wanna go to Iowa!” As I walked away with my bags I could hear him saying to another TSA colleague, “Straight thuggin’. That white boy’s crazy.” 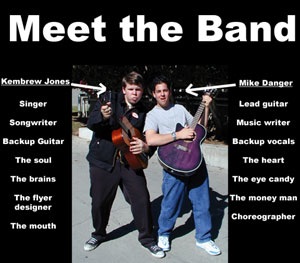 See All Posts by Kembrew McLeod

Kembrew McLeod is a professor of communication studies at the University of Iowa and an award-winning author of several books. In October 2018, Abrams will publish The Downtown Pop Underground: New York City and the literary punks, renegade artists, DIY filmmakers, mad playwrights, and rock 'n' roll glitter queens who revolutionized culture.