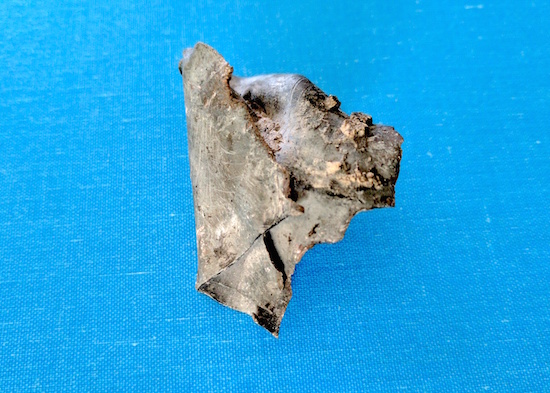 If you saw this piece of dull, twisted metal on my dresser, you would no doubt think it was a piece of junk. You might wonder why the hell I have it, then look anxiously at the ceiling, wondering if it had fallen from somewhere. In a sense, it has. This wavy hunk of steel is one of the few bits remaining from a car that was vaporized in a bomb.

There is a place in Socorro, New Mexico, right near the White Sands Missile Range, called the Energetic Materials Research and Testing Center. It’s a lab where researchers test rocket launchers and mag rail guns and safety procedures during urban warfare. They also make diamonds using underground explosions. And occasionally, they let a journalist in to watch them work. That’s why I was there, over a decade ago, hunched in a bunker next to a car that was about to explode.

The techs weren’t actually studying the car. They knew how that would go: a flash of light, a new crater, a hail of random auto parts. This was an experiment related to reinforced concrete wall design. Scientists wanted to know whether the kind of wall they’d built next to the car would fall down when the car exploded. Also, they wanted me to know that it was absolutely mandatory that I not take anything away from the site. They needed to track every shard, pellet, and rock.

I waited until they had mapped the site, photographing and measuring to a pretty extreme level of granularity. The wall had done OK, but not great. I wanted a souvenir, but all that remained of the car was the engine block, hurled several meters away from where the car once was. They had packed the trunk with dynamite; I guess the blast had somehow pooted the engine out in accordance with a law of physics I do not know.

At last, we hiked up to another site where people were shooting guns with four-foot long barrels. I never quite understood whether they were prototypes for a new and incredibly awkward type of weapon, or just experimental models. I looked down and saw the piece of warped metal and scooped it up immediately. I’m not sure if it was from the explosion I witnessed or something even more dramatic. It had survived. That’s all I know.

See All Posts by Annalee Newitz

Annalee Newitz is a science journalist, cofounder of io9.com, and author of the 2017 sci-fi novel Autonomous. Neal Stephenson says: "Autonomous is to biotech and AI what Neuromancer was to the Internet."