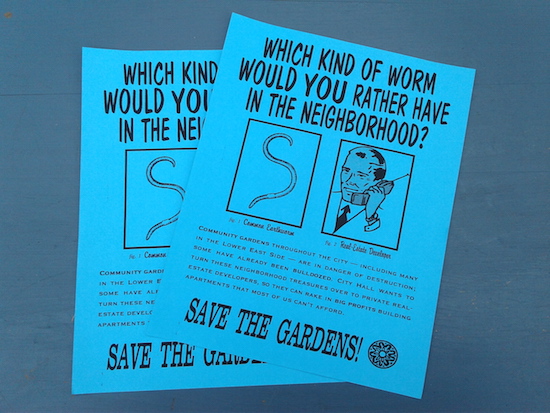 There was a time, in 1998 and 1999, when this poster (an homage to ACT UP’s legendary “Know Your Scumbags” poster) was everywhere in the East Village. Every few weeks, crews of us would go out wheatpasting after dark, affixing long strips of four or five posters on the neighborhood’s lampposts, until the bright blue punctuated the streetscape of every block.

It was pure luck that the clip art I found for the poster so closely resembled the real-estate developer who had made a business of bulldozing community gardens to build tacky overpriced condos. But our real target was Rudy Giuliani, who had a special animus toward community gardens. He put a handful on the auction block in 1998, and we did our best to disrupt the sale, releasing 10,000 crickets into the auditorium and calling our action “nature’s revenge against greed.”

Defy an unstable autocrat, and you may goad him into showing his hand. Angrily declaring that “the era of communism is over,” Giuliani put more than 100 community gardens on the auction block for spring 1999. All that spring, we plastered the landscape with worm posters. Having seen and chuckled at the poster, people would eagerly take leaflets from us when we stood outside the subways in the morning, and they’d sign up for our email list when they got to work. Our network and our protests grew larger and larger. At the 11th hour, with large numbers of protesters poised to turn the auction into mayhem, Giuliani caved and cut a deal to sell the land to two nonprofits.

We had won. The hundred-plus gardens were saved, and no one ever threatened them en masse again.

Fast forward to 2016. Yes, many gardens had been permanently preserved, but soaring rents were displacing all but the very rich from the neighborhoods around them. Shiny towers sprang up everywhere, and business improvement districts began to hire cleaning crews to remove dog-walker ads, sublet notices, and political posters as soon as they went up on lampposts. Much activism had moved online anyway: It was a whole lot less messy and time-consuming to post a meme on Facebook.

Meanwhile, lawn signs for a certain presidential candidate started going up, in rural areas far from the East Village. At first the signs were few in number, and invited ridicule. Staking out space in public, though, emboldens others to act. Even as the major media assured everyone that the longshot candidate was losing, more and more of his deep-blue posters appeared. By early November, they were absolutely everywhere in rural areas, creating a sense of momentum that those observing the election from cities missed.

Posters can’t win a fight, and yard signs didn’t win the election. But we would do well in the days ahead to remember the transformative power of reclaiming political space in the physical world. A ratio of three or four parts water to one part flour makes a fine wheatpaste. Just be sure you have a great message, and good lookouts.

See All Posts by L.A. Kauffman

L.A. Kauffman is a longtime grassroots organizer and journalist and the author of Direct Action: Protest and the Reinvention of American Radicalism.