My debut novel Taty Went West was published in Kenya in 2015. I had discussed author pics in detail with my UK literary agent Sarah Such, who is herself a uniquely stylish individual, with eclectic tastes and a flair for promotion. I had done many professional shoots over the years, for my band and some friends in fashion, so, I started thinking along those lines.

I had done a cover shoot for Stefan Naude’s Cape Town lifestyle print magazine, The Lake, where I decided to wear pieces from my friend Petro Steyn’s label, Skeet Streetwear, which included a mischievous neoprene hat/mask, with fox ears. I selected one of the unused headshots for my author pic, snapped by versatile and talented fashion and commercial photographer Hayden Phipps. Somehow, the image created a debacle with Kwani Literary Trust, my Kenyan publisher.

I was informed that my precious fox ears would somehow offend large sections of the Kenyan readership. No real explanation was ever given by Kwani, except that we should trust them on this; fox ears would NOT go down well in Nairobi. I had a good working relationship with Kwani, so I didn’t doubt the veracity of their claim — but it did pose something of an issue for me, because I do not take kindly, at all, to anyone telling me how I should or should not dress. A polite little war ensued, where the affair was tossed back and forth, until I finally, for the sake of diplomacy, relented and offered to provide alternatives.

At the time, Jenna Bass happened to be shooting a music video for my band, The Wild Eyes. Jenna opted to shoot the single “Vampire Radio” in negative. I had trained as a mime, and would often break out in spontaneous mime routines. In fact, once in Paris, I had trouble getting along, so I decided to go incognito, as a mime. Nobody expected me to speak and strangers kept giving me cash. A sensible fashion choice.

However, in order to do the mime look in negative, I would be obligated to paint myself black, with white eye and lip highlights. So, we also did a gothic shoot, in positive, wearing all black. Kwani loved the gothic look and chose a profile headshot for the print edition. Some over-politicized South African students and an elderly news editor were up in arms about a “blackface” portrait, but were then instantly nullified by Kwani’s own enthusiasm for gothic culture and the image, which in fact, had been their favourite choice, out of over five options. Since Kwani enjoyed such a powerful prestige in the African literary community, this second debacle defused, into a bemused haze of pseudo-political confusion. By the time I started doing South African literary festivals to promote the book, the portrait had made the front cover of a regional newspaper’s entertainment section, spreading this aura of perplexity. All very me, I suppose. Though, I did miss my fox ears… 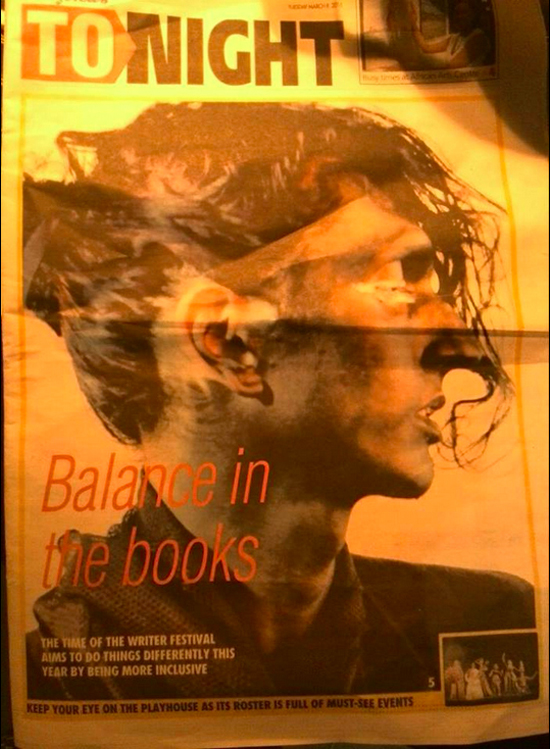 See All Posts by Nikhil Singh

Nikhil Singh is a South African artist, writer and musician. Former projects include the graphic novels Salem Brownstone written by John Harris Dunning (longlisted for the Branford Boase Award, Walker Books 2009) and The Ziggurat (Bell-Roberts 2003) by The Constructus Corporation (now Die Antwoord). His work has also been featured in various magazines including Dazed, i-D Online, and Creative Review, as well as Pictures and Words: New Comic Art and Narrative Illustration (Laurence King, 2005). His debut novel Taty Went West was published by Kwani? Trust in 2015, Jacaranda Books (UK) in 2017, and Rosarium (US) in 2018. The book was released with an accompanying soundtrack and was shortlisted for Best African Novel in the inaugural Nommo Awards. He was recently invited to submit a story to The Unquiet Dreamer, a prestigious Harlan Ellison tribute, from PS Publishing in 2019. The story “The Re-Evolution of Cloud 9” has been longlisted for Best Story in the 2020 Nommo Awards. The novel Club Ded, published by Luna Press Publishing (UK) in June 2020, was shortlisted for Best Novel in the 2021 British Science Fiction Association Awards. Short story “Malware Park” will be published in a forthcoming anthology by Titan Books, edited by Preston Grassman. To date, the author has participated in the following festivals: African Futures (Nairobi 2015), Time of the Writer (SA 2015), African Utopia (Southbank Center UK 2015), Africa Writes (British Library UK / Royal African Society 2016), Worldcon 75/Hugo Awards (Hugo Awards presenter / profiled writer Helsinki 2017), South African Book Fair / Bookweek (SA 2017), Readercon (Boston 2018), New York Science Fiction Review (NY 2018), Cymera (Edinburgh Festival 2020).