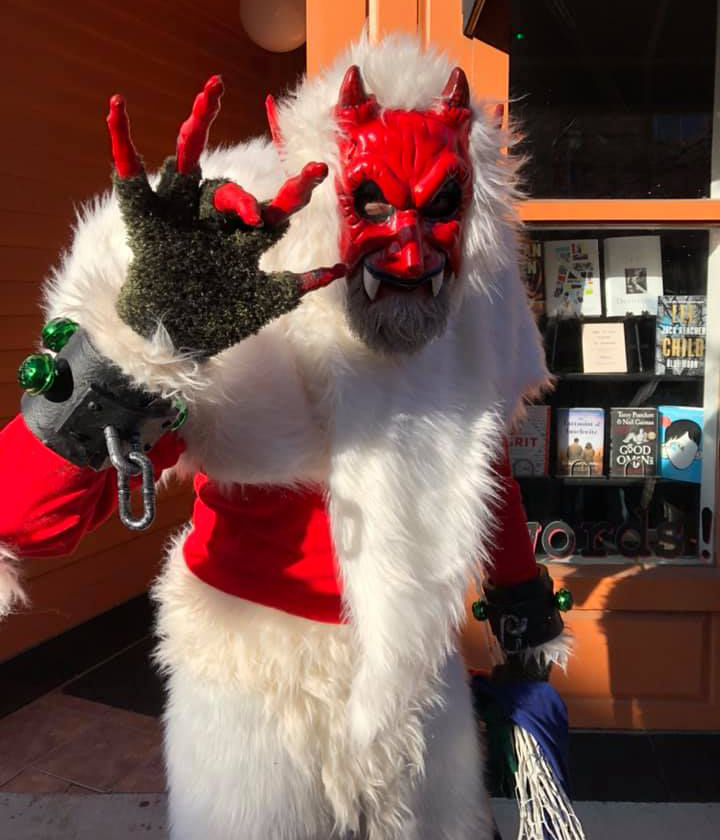 My favorite word is “juxtaposition.” Something about two wildly different concepts meeting and merging into one entity is always so interesting to me. It’s why I love to get spoopy, which derives from the silliness in horror and Halloween. That’s where Krampus comes in.

Christmas is my favorite holiday, JUST edging out Halloween. I love the magic and wonder of it all. But there’s always that part of me that wants to explore the sinister and scary parts of Yule, and there are quite a lot! So many traditions of monsters and scary times, primarily in European folklore, have been around for hundreds of years. These stories weren’t necessarily associated with Christmas but the solstice, the time of year when the sun is down as much as possible. The legends were designed to keep people home instead of going out in the cold darkness.

Some of these traditions center on parties and celebrations to make staying home with loved ones more enjoyable (or more often bearable). But the monsters are designed to scare you away from going out during this time of year. My favorite and arguably the most famous is Krampus.

Often known as the anti-Santa, Krampus comes out on Krampusnacht to punish the naughty kinder. If you weren’t so bad you just get some chocolate-covered sticks. But the worst of the worst are stuffed into Krampus’ basket and taken to his lair, never to be seen again!

Needless to say, when I was in my late teens and first heard of Krampus I was enamored! What a fun character to juxtapose Santa’s jolliness. I started to absorb all the lore I could on Krampus and his Yuletide monster brethren. So much that I started to create my own version of the character. 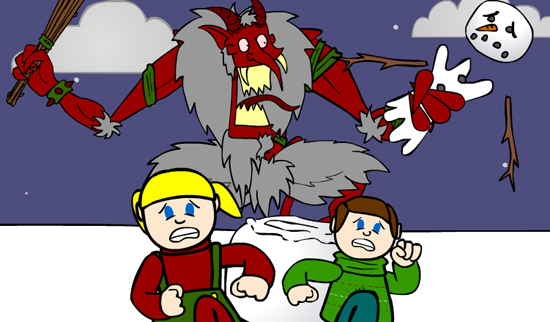 In 2014 I wrote and animated a song simply entitled “The Krampus!” and sang it with my dumb but favorite Arnold Schwarzenegger-esque voice (Krampus is Austrian, afterall!). My concept was sort of to Americanize the character, similar to how our version of Santa differs from the English, and indeed every culture’s take. I made Unkle Krampus, as I’d soon name him, tall and lanky to be the opposite of Santa’s stoutness. I gave him red skin like the devil with grayish fur, mirroring Santa more. But where Unkle Krampus really starts to differ is how I make him act.

See, lots of Krampuses are very mean and scary. Unkle Krampus revels in punishment with a jolliness akin to Claus’! He’s affable and funny, just as long as you aren’t on his naughty list. But he also genuinely believes in “spare the rod, spoil the child” and thinks what he is doing is for the greater good.

Since the music video (which currently has over 200,000 views), I’ve used Unkle Krampus more. I had him recite a new, Americanized poem detailing his nephews (as I call them) The Yule Lads. I’ve also made another music video, this one parodying The Squirrel Nut Zippers’ song “Hell” which is all about Krampus Night! This was the first time Unkle Krampus became a real living breathing character in the costume I created to portray him. 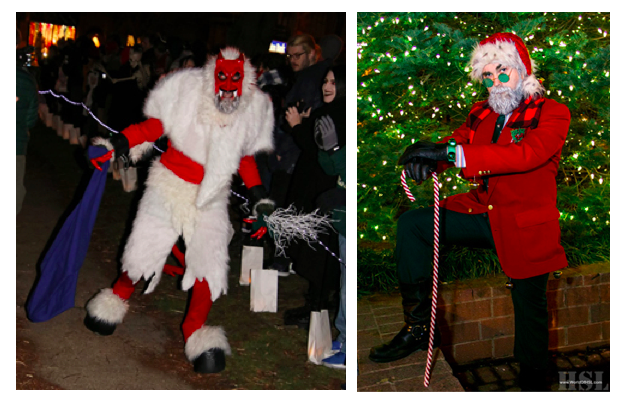 The same year, I took Unkle Krampus to the masses at the Asbury Park Krampus Fest. I would tower over guests and make jokes about their naughty ways. I even set up shop calling kinder over to ask what they DON’T want for Christmas!

“No” was invariably the answer, of course!

The costume itself involves a half mask allowing my mouth to emote, broad furry shoulders, and hooves made of paint cans giving me an extra foot to loom over the naughty festgoers. People really seemed to enjoy Unkle Krampus’ antics and presence, even naming him “Best Krampus” at the 2019 festival.

It’s so much fun bringing a character to life and adding my own silly twist to them. It’s even better when they are accepted and praised by the people who are interacting with them. And don’t worry, Unkle Krampus has lots more in store for the naughty kinder of the world!

Justin J Bowen is a multi-talented artist who loves to create in as many art-forms and mediums as he can. Primarily creating characters, he’s done work in animation, cosplay, puppetry, writing, game design, music, sculpting, and much more. See his various works @JackSquatJB everywhere! If you want to support his artistic endeavors go to Patreon.com/JackSquatJB. All supporters get an original character designed!