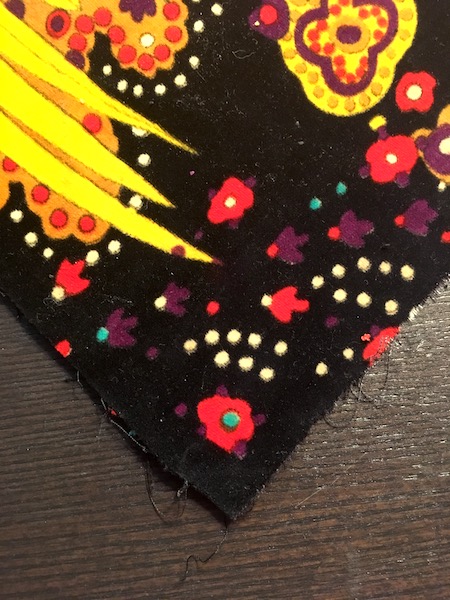 I first wore it while dropping acid on my bucolic upstate campus. It felt like an appropriate debut for the greatest thrift-store purchase of my life.

Across its velvety black exterior, a crowd of psychedelic blobs, abstract feathers, and Kirby crackles screamed in goldenrod, aquamarine, ochre, vermilion and plum — like the Vegas Strip puking itself up across the night sky. The pointy collars could easily put someone’s eye out, and the oversized buttons were fit for a cartoon clown.

My friend Hope said, “You’re looking pretty cha-cha in that jacket.” Cha-cha became the night’s leitmotif, climaxing in a pre-dawn amble across a stunningly landscaped garden overlooking the Hudson. I peacocked up to an archway proscenium that framed the gliding river, the rest of the world stretching past the horizon like a black-light rendition of Saul Steinberg’s view from 9th Avenue. Gesturing with my resplendent sleeve, I said, “Welcome to my cha-cha kingdom.” Applause.

Despite its mothballed provenance, the jacket became a totem of hysterical youth, a marker of my gleeful need to possess the world by protruding into it. Even when Hope and I moved to New York to get married and produce theater, people would stop to stare at its mock-shamanic oddness. If I couldn’t make a mark with my work, I’d do it with my wardrobe.

I loved this jacket so much that it was hard to admit when the cha-cha kingdom began crumbling. Eventually, I couldn’t button it up anymore — my most successful protrusion was in the area of my gut. Invincibility faltering, my body had rendered this sacred object ridiculous.

I hung it up next to our living room window — as decoration, artifact, maybe even incentive to lose a little weight. Sure. Mostly, it was a proof that our most cherished symbols can literally disappear into the woodwork. For more than a decade, well past the point when I stopped writing plays, it barely stood out — until this spring, when Hope and I were packing up to move after 19 years in our first post-college apartment.

The sun had blanched one arm a fluffy taupe, but when you pulled it back, the neon still flashed. What was it going to do now — languish unseen in the back of a closet?

I grabbed some scissors, cut a swatch from the back, and gently folded it up to travel to our new place. It’s unfurled in front of me right now, desperately curious to find out what comes next. 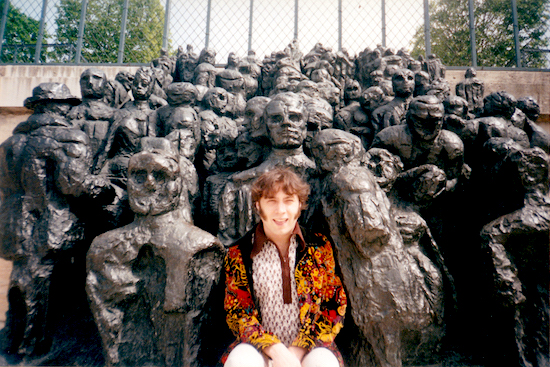 See All Posts by Jeff Lewonczyk

Jeff Lewonczyk is a recovering playwright and aspiring cartoonist who lives in Brooklyn. His children’s holiday comedy Bethlehem or Bust has been performed in schools across the country, and his illustrated travelogue I Went To India, and All I Brought You Were These Lousy Cartoons has been featured in publications ranging from Buzzfeed to the Hindustan Times. Visit his website here.