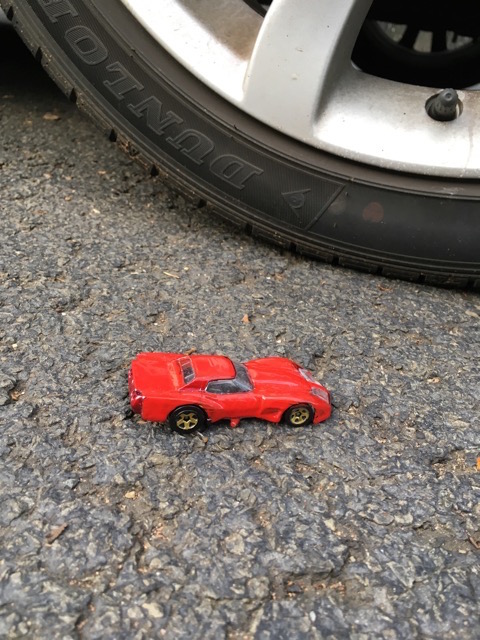 In the supermarket, picking up some drinks and snacks, I came to the end of an aisle, turned right, and almost bumped into it: a large cardboard bin filled with Hot Wheels, those tiny die-cast cars that were part of my childhood, and continue to be, well into my forties. I forget what they used to cost, but the cars were only a dollar. Nothing costs a dollar anymore. I put the drinks and snacks on the ground and started rooting through the bin.

Soon enough, I found what I didn’t know I was looking for — a Corvette. This was early May of 2016. Prince had just died. I had just started writing a book about him. I knew that I needed a little red Corvette, somehow, as a talisman. The only problem was that the one from the bin was black. I bought it. I took it home. I went into the closet and found the model paints that my sons no longer use. I painted it red.

That night, like every night that spring, I worked for a while on my Prince book and then stopped to watch the news. It was the night of the Indiana primary, which was making the unthinkable thinkable: Donald Trump, with his victory and the withdrawal of Ted Cruz and John Kasich, was the presumptive GOP nominee. The picture on the TV was unnaturally sharp, like a bad dream. I had the Corvette in my hand and I turned it over and over for comfort. The paint hadn’t completely dried, and it was still satisfyingly sticky.

For the rest of the summer, for the rest of the year, I kept that car near me at all times. I put it in my pocket or my backpack when I went out. I kept it on the side table when I worked. It guided me through my book project, but also through the election cycle. I kept thinking of one lyric in particular from “Little Red Corvette,” from the chorus in fact: “Baby, you’re much too fast.” The year went that way, much too fast, even though it also took forever: however long it took, it was rushing by, without time to think, without time to process. Before I knew it, it was election night, and I was watching the coverage with my family and my little car, fidgeting, hopeful that it would secure the desired outcome, or — when that outcome started to slip away — repair what was suddenly in the process of breaking.

It didn’t, obviously. I turned off the TV, which was as red as the car. I did some late-night work on the book, mostly as a distraction tactic. The next morning, I started work again, but when I turned to look at the car, it wasn’t there. Or rather, it was there, but it was something different now, not a toy, not a rabbit’s foot, but a reminder of how hope can suddenly turn, how sadness and loss are real things rather than simply rhetorical ones, and how resignation has to ultimately convert into resolve, so that time can start moving again.

See All Posts by Ben Greenman

Ben Greenman is the author of several books of fiction and nonfiction, some best-selling, including The Slippage, Please Step Back, Don Quixotic, and (with Questlove) Creative Quest and the new Mixtape Potluck.