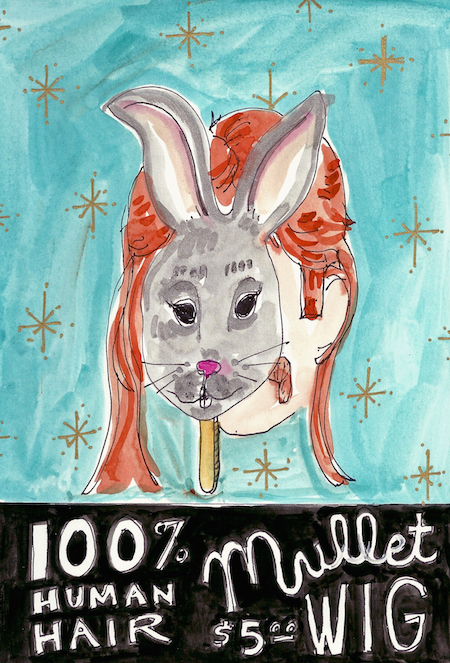 The night before I wore the mullet wig, in a circular, star-lit private room, I was introduced to a woman (peach gown, auburn hair, moon-glow complexion) who, grasping my hand, said I know everything about you. I longed and dreaded to ask her what she knew, for I knew nothing then of myself!

The party went very late. I awoke alone to a brilliant blue and washed morning — eventually my husband returned. We took the elevator down and waited for a white vintage Jaguar to pull up to the hotel. Dressed in a Beefeater outfit, the doorman tipped his hat, opened the door for me, and gazed into the car. A Jaguar is a beautiful creature but the Beefeater’s expression, full of desire, was directed at the car’s driver. The Beefeater seemed not to be aware that he was in costume; I marveled at this. My husband worked to fold himself into the tiny back seat beside an unfamiliar man. At the soiree later that night this man, who had an affable face, would be dressed in a robe — a monk’s robe? a judge’s? a nun’s? — and would preside over the marriage of the driver to the beautiful, red-headed woman who had known everything about me last night.

The affable man continued speaking to the driver about a song by the driver that blasted out open windows. We floated downhill. Coffee splashed — I gasped — I wore a white jacket over a white undershirt (later I would add a black satin tie) — its purity spared — no one had noticed the peril. “This is a really good song,” I said. “The roses are so pretty this time of year!”

I was excited. We were being whisked — secretly — to a costume shop. The costume shop was closed but the costume shop was going to opened for us. In the dark shop, rows and rows of heavy textiles — strangely perfumed — among them got lost near a tiger. The costumes were for wedding guests to be photographed in, but this search for incognito attire sought something else with its palm. The groom held up garments (black velvet, white leather, gold armor). The stranger was decisive, nodded yes, no, yes, no, yes, yes and so on.

I was told to select a few wigs. Blonde, rainbow, braids, none suited me but many such wigs were acquired. And then I found it. In the mirror, I saw myself just as I had always imagined. I felt bewitched, I felt formal. Finally, I understood what Rimbaud meant: J’est un autre. “That looks good,” the groom said, as if he never had seen me before! As if he didn’t know me! All the make-believe outfits went into an old-fashioned trunk.

At the soiree, I wore the mullet wig for a portrait. In it, my husband holds a rabbit mask in front of his face. I look just like myself only different. He looks like a man holding a leporine mask in front of his face. In the wan light of the next morning, Champagne-lit, I was whisked back to the hotel in a white van. Alone in the room I discovered I was still wearing the wig. I have no idea where it is now. Nor my then-husband.

ABOUT THE ARTIST: Amy C. Evans is an artist, writer, educator, and independent documentarian based in Houston, Texas. She appreciates a good meringue and can never eat too many oysters.

See All Posts by Kate Bernheimer

Kate Bernheimer is the author of a novel trilogy and the story collections Horse, Flower, Bird and How a Mother Weaned Her Girl from Fairy Tales and the editor of four anthologies, including the World Fantasy Award winning and bestselling My Mother She Killed Me, My Father He Ate Me: Forty New Fairy Tales. Her recent novella, Office at Night, co-authored with Laird Hunt, was a finalist for the 2015 Shirley Jackson Awards. She is an Associate Professor of English at the University of Arizona.