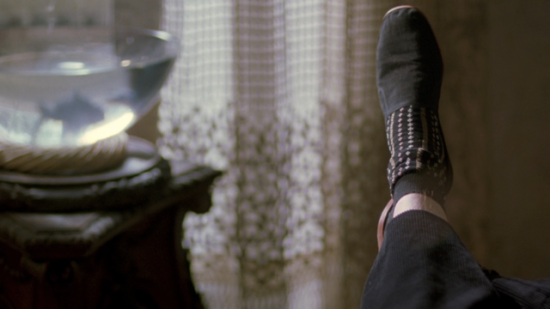 There’s a ten-second scene in Bertolucci’s 1998 film Besieged, in which Thandie Newton, an African migrant housekeeper, spies David Thewlis, playing a bourgeois pianist, asleep on a divan. While she is hard at work mopping a floor, he is zonked out, a book cradled in his arms, his legs crossed and dangled over the edge of the couch. Tracking Newton’s gaze from behind, the camera first zooms in on his foot, clad in black Chinese slippers, then to a close detail of his sock. The sock — the most luxurious and beautiful in the world — represents the epitome of bourgeois bohemianism; someone who not only has all the time in the world to doze off while reading in the middle of the day while others toil, but one who also has the means to do so. Typical of Bertolucci, something as simple as a sock can encapsulate the entire histories of class and race.

But that sock. That sock. I want that sock. From what I can tell, it’s made of the finest dark brown merino wool, woven with delicate and intricate patterns in beige, tan, and pink. You can tell how expensive it is by the way it lays on his leg, pulled down just so, folding just so. The way the sock slides down his ankle bespeaks of leisure; no man in the working world would be permitted to let his sock slack in such a way. As such, this sock represents everything I aspire to in the world. And for that reason, although I might be able to purchase this sock, I’ll never be able to acquire the leisurely lifestyle that goes with it. 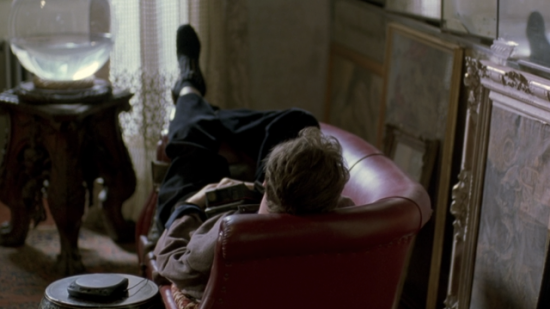 See All Posts by Kenneth Goldsmith

Kenneth Goldsmith is a poet living in New York City.