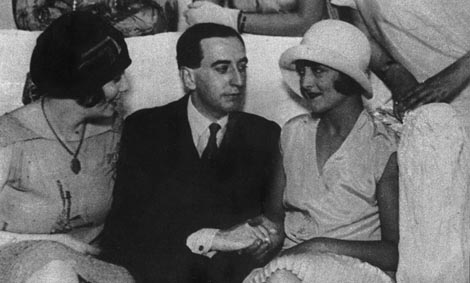 The scion of Chilean aristocrats, VICENTE HUIDOBRO (1893–1948) spent his youth and early adulthood sending love letters to famous Parisian beauties, publishing a premature autobiography, and editing a series of literary journals that promoted his self-invented poetic school of Creationism, writing, in one of many manifestos, “The poet is a god; do not sing to rain, poet, make it rain.” His European travels in the 1910s and 1920s brought him into contact with Pierre Reverdy and Guillaume Apollinaire, but his utter lack of humility alienated most potential allies: He once boasted in an interview, “modern poetry begins with me.” (At home, his disavowal of metaphor and description also made an enemy of the warm-hearted, adjectival Pablo Neruda.) Huidobro may not have been all he claimed, but he was certainly one of Latin America’s earliest adopters of modernist literary techniques. His major work, the book-length Altazor — published in 1931, but written, he said, much earlier — traces the descent to Earth of a mythic, “cosmically outrageous” parachutist, whom the poet addresses and identifies with by turns. In the poem’s later cantos, personality, event, and standard vocabulary dissolve into grammatical and onomatopoeic play: the last lines, in the original Spanish, run “i i i i o/Ai a i a i i i i i o ia.” His later life is only slightly less bizarre, from his elopement with an underage Chilean heiress to his liberation of Hitler’s personal telephone from wartime Berlin. Whether these stories are fact or legend, as critic Justin Read notes, is a bit beside the point; ever the Creationist, “Huidobro lived his life as if they were true.”

On his or her birthday, HiLobrow irregularly pays tribute to one of our high-, low-, no-, or hilobrow heroes. Also born this date: Ray Bolger, Max Roach, Jemaine Clement.