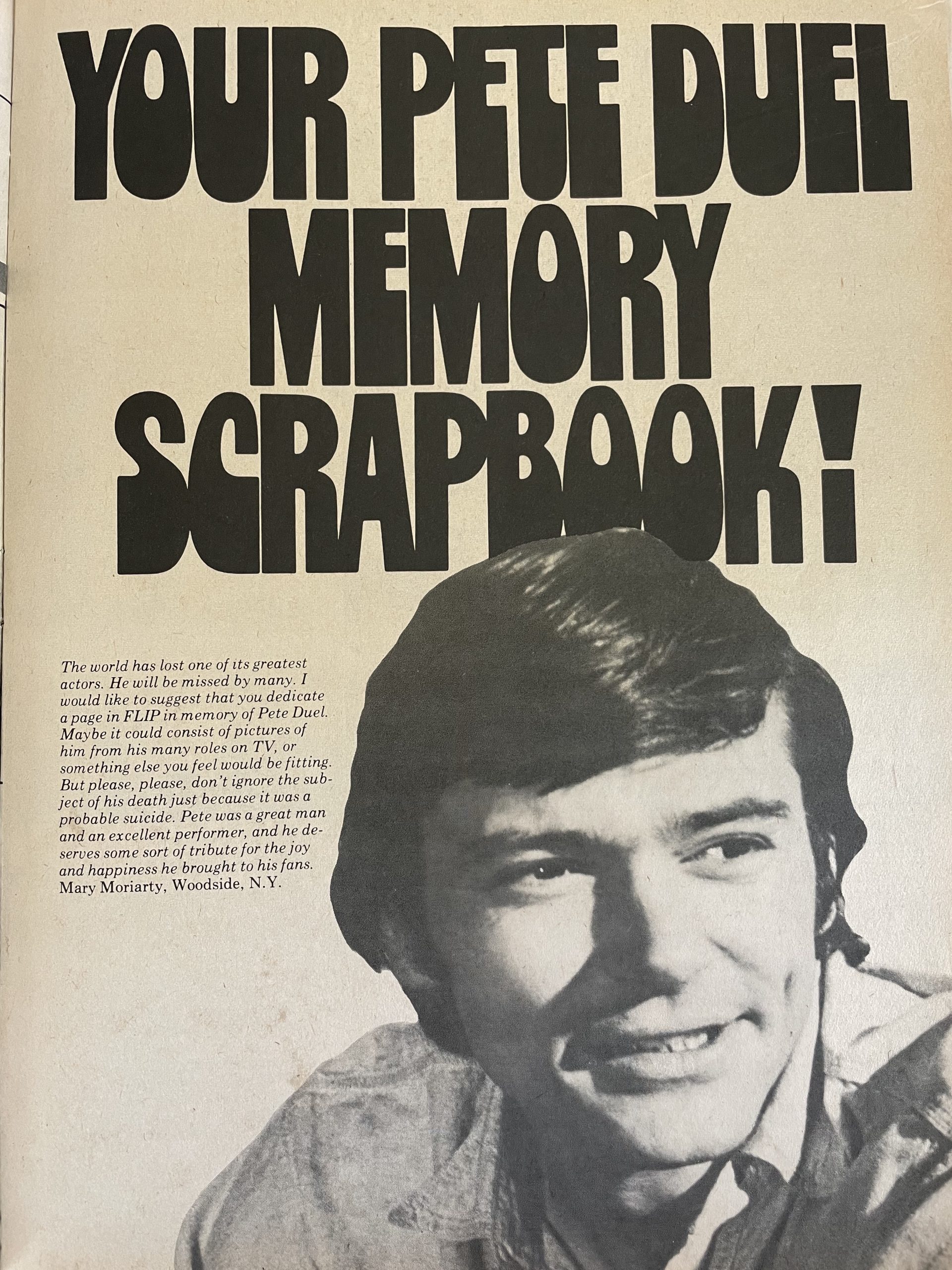 Early on the morning of January 31, 1971, actor Pete Duel put a .38 caliber pistol to his head and pulled the trigger. His distraught girlfriend called the police but the 31-year-old star of TV’s Alias Smith and Jones was dead before they arrived. Newspapers noted Duel had been “despondent” over his alcoholism and a felony drunk driving charge, stemming from an incident in which two people had been injured.

He was also unhappy with his career. Four weeks before his death, Duel told a columnist that acting in a television series was “a big fat drag to an actor who has any interest in his work.” A series was “the ultimate trap,” as well as “a dreadful bore” that left one “weary, weary.”

Duel’s series, Alias Smith and Jones, was a western comedy. Set in 1890, two notorious outlaws, Hannibal Heyes (Duel) and Kid Curry (Ben Murphy) are promised amnesty on the condition that they stay out of trouble for a year. Hijinks and romance ensue as Joshua Smith (Duel) and Thaddeus Jones (Murphy) do their best go straight.

Duel was dark and dreamy; Murphy, a cuddly redhead. The duo was catnip to the teenybop audience, with photos and stories in magazines like 16 and Spec. Duel’s death stunned his young fans. Flip gathered their letters in a May 1972 feature, “Pete Duel: Your Memory Scrapbook of His Life.”

“Here it is, 1:30 in the morning and I’m babysitting. Pete Duel has been dead for 24 hours. God, why? … Why must such a sweet, talented, caring, beautiful guy like Pete have to die such a tragic death?” wrote Martha, in Malibu.

“It’s been five days now since I heard of Pete Duel’s death. It came as a shock to me, and I know many others grieved with me. … I had a special place in my heart for him and I still do,” wrote Jeanne, in Minneapolis.

“I loved Pete Duel with all of my heart, and I just can’t believe he’s really dead,” wrote Jona in Salt Lake City.

I couldn’t really wrap my head around it either. I was ten years old and a devoted fan of Alias Smith and Jones when Duel committed suicide. My mother probably explained the concept to me, but I had a hard time understanding why someone would do such a thing. By the time another TV crush, Freddie Prinze, died five years later, I understood depression, and mourned for Freddie and his pain. Just a kid when Pete Duel died, I was more bewildered than sad.

Adding to my confusion, the show pretended nothing happened. Hours after Duel’s death, actor Roger Davis (who provided each episode’s voiceover narration) stepped into the role of Heyes/Smith. Ben Murphy had to recreate scenes that he had already filmed with Duel.

“I felt guilty about taking over when Pete’s body was hardly cold,” said Davis. “But it was pointed out that if I didn’t, plenty would.”

Alias Smith and Jones was canceled in December 1972.