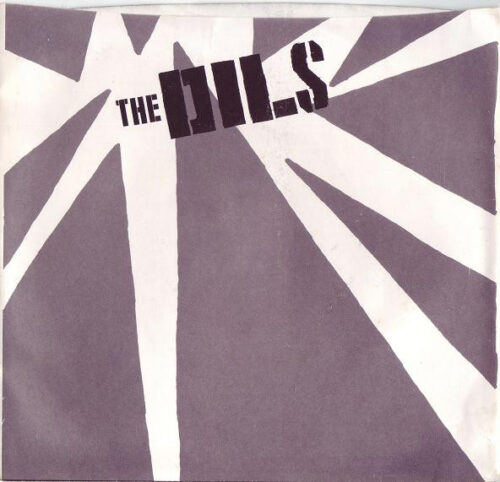 b-side of a seven inch (I had “the oils” cover) that had a HUGE impact on my life. same w/this band’s effect on the minutemen and even more, the bassman tony nineteen. now my first punk rock hero was richard hell who was a bassman who led his own band (the void-oids) and wrote the tunes — a GIGANTIC inspiration to someone who previously thought bass was where you put your dumbfuck friend, like being put in right field in little league (where no one hardly hit the ball) — being on bass acquired a new meaning to me. trippy how the first richard hell and the void-oids album also had the word “blank” in its title — a big diff though for me regarding these two bands was I never got to see nyc-located dick hell ’til 1983 and that was in what was then called west germany! I saw the dils many times starting in 1977, driving up to hollywood from my pedro town to see gigs w/d boon and georgie. coming from arena rock (the first gig me and d boon went to was t-rex when we were fourteen), see stuff in clubs was a total fucking mindblow — I could actually see that the bass had bigger strings! the dils were a great fucking band to see at a gig, really good. I had a dils armband I got one time but then lost it like a fucking idiot in a pogo. so I’m talking about seeing them live when this is supposed to be about the record but the two were big time connected… it’s hard for me not to hear this song play and then in my mind remember them doing it live. tony was such an inspiration to me the way he sang, played bass, dressed, worked the stage — just everything, loved it. this tune has trippy parts — it ain’t all straight-ahead oompah, the first part has got this “call and response” between the guitar and bass that’s really distinctive. in a way the words remind of sentiments I’ve heard in some patsy cline tunes, a kind of parallel in a way I felt resonate in me. two years ago tony’s brother chip told me to come see tony cuz cancer was killing him. I was in edmonton for a missingmen gig but the next day flew back and drove straight to the hospice where tony was. it broke my heart to see him like that, all beat like my pop was when cancer was killing him back in 1991 — both these big strong beautiful men beat down by that fucking shit. I brought my 1956 (year he was born, a year before me) fender pbass, don’t really know why but just did… we talked for a couple of hours and then he said he was tired… I was so sad — he said he’d sign my bass and asked if I wouldn’t mind if he was “a little romantic” and I told him “it’s ok” and he wrote on it: “love u you mike, 19” and then I left… man, I cried and cried. we lost him not long after. I love that man, this tune is real special to me.

See All Posts by Mike Watt

Mike Watt is a bass player from San Pedro, California. He is best known for co-founding the rock bands Minutemen, Dos, and Firehose.