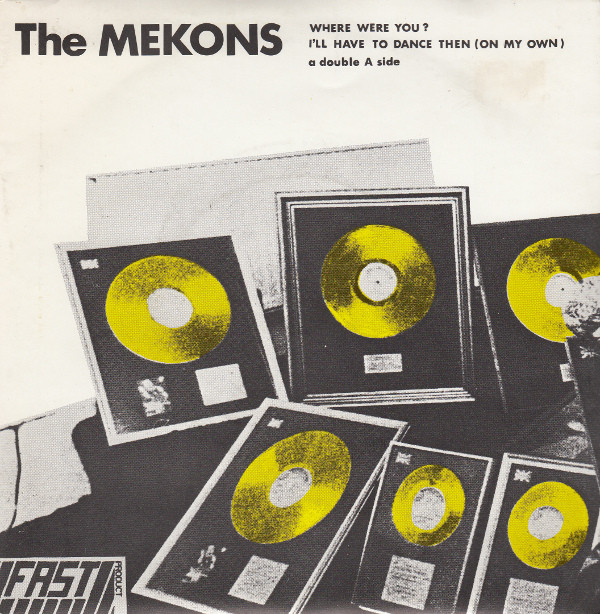 The Mekons’ celebrated second single was released at the end of 1978, selling out its 27,500 copies. I did not purchase one. To answer the question posed by the song: “I was visiting Buenos Aires at the height of the Dirty War / Where were you?” In my defense, I was only seven. I was visiting family, sightseeing, dancing the night away at my cousin’s rager of a bar mitzvah party. I didn’t know anything about anything yet, let alone punk. Therefore, you now know that everything I have to say from this point on is inauthentic, within a subgenre of writing about musical experience that relies so heavily on authenticity and cred. I came into Mekons Consciousness only in 1989, after hearing “Club Mekon” on the radio and immediately sending away for my party membership. But The Meex I fell for weren’t who they had been at the beginning. By the Punk Doomsday Clock, I got to know the band around 11 a.m., whereas the group that released “WWY?” were the 5 a.m. incarnation of it. (Today, only Jon Langford and Tom Greenhalgh remain from the original lineup.)

The version of “WWY?” with which I am far more familiar is the one found on 1999’s compilation of the same name, sung by sometime Mekon Mitch Flacko. I’ve witnessed a number of shambolic, booze-soaked Mekons gigs where Mitch has stumbled up to the stage to sing this number. No matter how late in the setlist, the churning guitar opening, followed by a drumroll, is the cue to get your sorry bones moving again. But the lyrics are a key that unlocks a deeper dimension. The use of anaphora punctuates a frustrated love affair that jerks between extreme closeup (“When I was buying you a drink / Where were you?”) and wide-angle shots (“When I wave to you from a distance / Do you see me?”). Is it a number to pogo to in two feet square in a cramped public restroom while you’re fixing your hair and makeup over a filthy sink? Or is it one to chew over the next morning when you’re waking up alone (again)? There’s even a marriage proposal tossed in, amongst the despair (“Could you ever be my wife / Do you like me?”). The Mekons just wanted to settle down and live in domestic bliss. Even in 1978, posturing was just so exhausting.

See All Posts by Deborah Wassertzug

Deborah Wassertzug is a translator and writer who lives near Washington, DC.