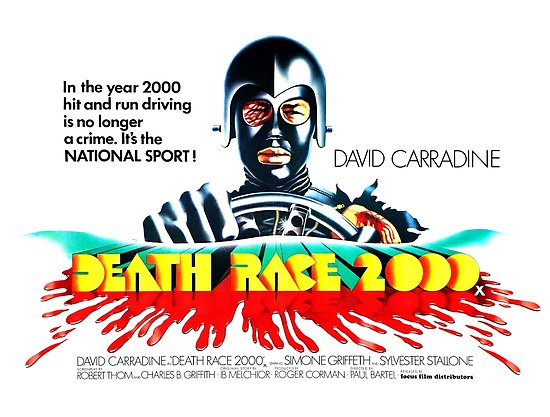 The West 4th street subway poster for Death Race 2000 depicted David Carradine in a black gimp suit, a Corvette tricked out like a prehistoric shark, and Simone Griffeth’s hips and torso, her breasts scratched into googly eyes, in the poster-defacement style of the moment.

I became transfixed by the poster, trudging past on the way to school, and it was no special trick to sneak off to see the movie. I had no functional supervision of any kind, and I’d discovered it was easy enough to leave the ludicrous hotel suite – then recently vacated by Clifford Irving – in which I lived with my parents and monstrous older brother, make some noises about going to the Muhlenberg Library down the block (a thing I often did) and instead go to a movie. I think Death Race 2000 played at the Lyric, but it could’ve been any of the others. In 1975, city kids went where they wished to go, and were largely invisible.

It’s hard to look at the city New York has become, or even at my own daughter (9 this summer, as I was in 1975) and wrap my head around this, but it was a – tectonically – different time. I had a look at Roger Ebert’s Sun-Times review of Death Race 2000, and the entirety of the text was about the unsupervised under-10 set at the screening with him, laughing their heads off at the ultra-violence.

Death Race 2000, a slapped-together Corman B-goof, shot in glory by Tak Fujimoto and directed by Paul Bartels, depicts a dystopian America in which the national pastime is a transcontinental road race. The participants rack up points by killing people en route. Each driver has a sex companion/navigator. Babies, the elderly and infirm (“feebs” in the movie’s parlance) and women are worth the most points if splattered. The race is a murderous reality TV show. The seat of the American presidency is Moscow. There is a resistance faction who oppose the violence of the race, but they too resort to cartoon violence, straight out of the Wile E. Coyote book of tactics — but with more blood squibs.

For me, at 9, the big takeaway was that you could laugh your head off at the ultra-violence. You could view violence as funny. You could do this even if you were a kid. I still clutch that idea around me like a ghastly Nehru jacket. It was a formative lesson, and it’s giving me the distance I need to navigate the actual hellscape of the American 21st century. The ridiculous satirical true one which has too much in common with Death Race 2000 to even really joke about.