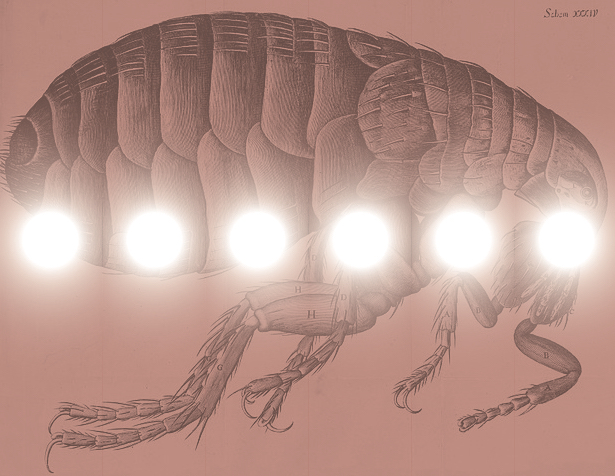 from Drawing of a Flea, Hooke’s Micrographia (1665)

An excerpt from Mandy Keifetz’s Flea Circus: A Brief Bestiary of Grief , winner of the 2010 AWP Award Series in the Novel.

The picture is a saint card from some long-gone Catholic school girl’s collection. St. Evlalia. Who died at age twelve. Who spent her nights catching the fleas in her blanket, separating them by sex, and then letting them go.
None of the saint books, not even the good ones, seem to know whether for her, this was a kind of prayer. Or simply an act of self-flagellation. But you preferred to think it was a kind of prayer.
The exegesis of a flea’s body was a kind of prayer for you too, Timmy. Hot summer nights, running a finger over my naked back, you’d absently trace a flea along my spine. I knew it was a flea and not some secret language of love, because I could feel your forefinger changing pressure as it moved from head to thorax to abdomen. Ten segments of abdomen. Three sections of thorax. Six legs.
One head. You always saved the head for last.
If I woke crying from a nightmare and crawled across the crack in our horrible trundle bed, you’d hold my hips and repeat the same words in an endless soothing loop.
“Order siphonoptera in the endopterygote section of neopterous division of the pterygote subclass of the class insecta,” you’d say, over and over, as if to say: all’s right with the world.
I mean to say that seeing Saint Evlalia’s mania as prayer wasn’t much of a leap for your imagination. I mean to say, I may have, eerily enough, looked like her, but it was obviously you who had her soul.
Although, come to think of it, I doubt if little Saint Evlalia ever wanted to be a flea. It was freaky, for me, Timmy, the night we first had sex, how you’d use your feet as well as your hands to caress me. Not that I had some weird Eastern horror of feet. Or that I hadn’t, as they say, done everything, by then. Just that I wasn’t used to thinking of feet as organs of touch.
I wrinkled my nose and you asked “s’up, Kid?” and I remember I struggled for a word.
“No. don’t stop,” I said “it’s just it seems so—”
“—Erotic?” you asked, so hopefully, grinning, I had to laugh.
“No, “I said. “Sybaritic.”
“Two pairs of palps, Kid. The better to read your skin.”
And damned if you couldn’t, Tim. Damned if those feet and hands and flashing eyes of yours didn’t seem to register every nuance, every shudder, every change in pressure and temperature. A strange fact about us, Timmy. It stands alone in a little box at the back of my head. That the sex was so good, it was excruciating.
One night early on, I hid my face in my hands and wept. So raw and wrung out and overwhelmed, I was embarrassed to look at you. What you felt, I can’t say, but what you did was jolly me out of it.
“You think that was good, Kid? C’mon, let’s watch Ulysses.”
You pulled me off the bed, over to the flea tanks. A journey of about a foot. A journey of a thousand years. No journey at all.
“I thought all those big ones were ‘Ulysses,’” I said. “One dies, you train another.”
“They are. All North American Giants. All male. All just under eight millimeters long. And all Ulysses. A thoroughly expendable commodity.”
“So?”
“So, look,” you said, unceremoniously plucking one Ulysses out of the tank, slapping your special magnifying goggles over my eyes. I looked first at myself, in the smoked glass of the Ulysses tank, and started. Beyond allowing for the close-up study of insects, your magnifying goggles had the additional feature of making the wearer look like an insect.
“They may be expendable,” you said, “but each one is equipped with two penis rods, wrapped around each other.”
“Like a caduceus,” I said, staring with no small awe at the black thing squirming in my lover’s palm.
“Or a very ingenious dildo,” you said.
“The Red Hook Wife-Tamer?”
“Hey,” you said. “even a Brooklyn boy can dream.”
We tried it a couple of times, twisting one of my pink flexible curlers around your cock, but we never really got into it. The spongy extra girth did nothing special for me, and you of course couldn’t feel it, having no nerves in my curlers.
But your point was your point, that lowliest creature on earth could have great sex. That the beatific is all around us. That “any flea, as it is in God, is nobler than highest of angels in himself.” 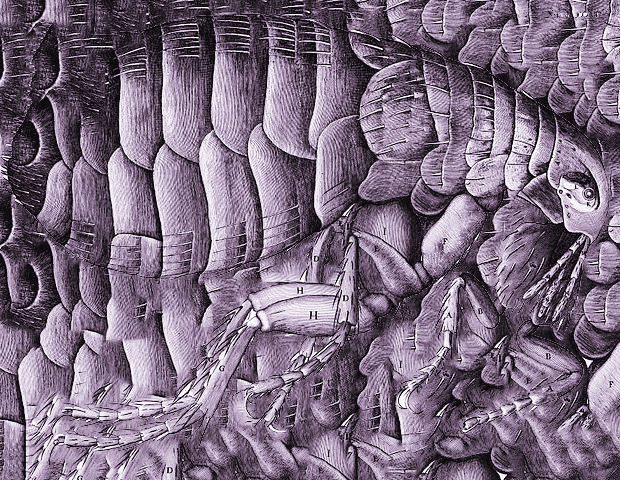