This month, the Brooklyn, NY-based art gallery Asphodel presents “Screed”, a four-part exhibition featuring new work and writing from Chloë Bass, James Hannaham, Lisa Kahlden, and Mandy Keifetz.⁣
⁣
HILOBROW is grateful to Mandy Keifetz, for permitting us to reproduce the text of her broadsheet from the show, “Trump Agonistes.” Only the opening sentence was altered. Images added by HILOBROW.

Friday, October the 4th, 2019 is the 988th day of the Trump administration. For 942 days, we have awoken into a world of sheer grotesque nihilism. The past seems not to matter because the idea of progress has foundered into ash, the ash of genocides piled one atop the other. The future seems not to matter, for I can imagine no further than a wall, a wall the precise size and shape of the tsunami that is coming for all the island dwellers as the seas rise; the precise color of the emptied flesh of the pandemic dead — a sucking monolith of a wall, erected in my imagination, draining mass from families rendered apart like horse fat.

There is going to be a catastrophic loss of life.

And it is going to be unfairly distributed.

It’s the wall that shuts down my vision of the future. And, well, no-future? Yeah, that’s not such an unfamiliar place to me. It is the essential aesthetic of the punk rock crucible in which my imagination was forged. No future is just how Reagan America felt to us.

But also no imaginary futures? No sci-fi, no alternate realities. No imagined dystopias? That doesn’t leave much, you know? Just a platform in space, a stage on which the grotesque horror comedy unfurls one sickening day at a time, aeterne.

I remember what it was like to imagine dystopia.

Here’s the thing: it wasn’t this stupid. It had some gravitas. The forces of darkness were intentionally dark. They had a plan, and they acted in concert. That was even what was wrong with them. They acted in concert and sought to kill off any who spoke against the dominant ideology. The Jack-booted fuckheads were evil on purpose, with that purpose honed. It wasn’t just capering heretical halfwits, draining the treasury in the service of — nothing. Spouting internally inconsistent incoherence and not minding. It wasn’t a legion of moronic fools, doughy from generations of shit food, clinging to their papa’s stripped mines. 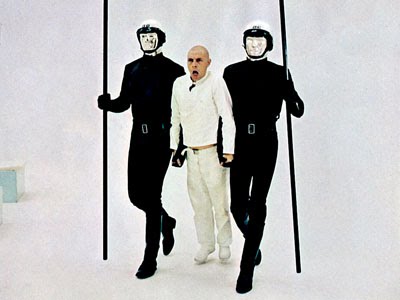 And if, okay, yes, it was a mass of people, utterly manipulated by media, clamoring to trade their very souls, now made binary, to the highest bidder — because we had that part down — we Reagan Imagineers — the machinery in which the media finally devoured itself wasn’t quite like this. Wasn’t so easily taken over by Petrograd thieves. There were Russian thieves in our idealized dystopia, but they wore combat boots and smoked Gauloises. In our dreams of dystopia, the machinery hadn’t been installed by a professor of constitutional law

(for no reason that has ever been explained to me.)

Because here too is the thing: the dystopias we imagined? The ones I now long for? Some things about them made sense. Creatures acted in accordance with their natures. Constitutional law professors were largely concerned with constitutional law. Secretaries of Education were concerned with learning. The head honcho at the bureau of land management may have been some dumb cowboy, but he did not make you yearn for Noah Cross. Did we hate them and their square, square vision of what their purview ought to be? I mean, sure. But were they the retarded kid sisters of billionaire mercenaries? Were they torture chicken billionaires lacking one minute of experience in governance?

In ideal dystopia, the evil head of the EPA is a mad scientist, not a drooling CEO. The Vice-President is a brilliant Iago, not a deformed elf, cowering before the very spectre of sex. The Attorney General is a malevolent racist, hypnotized into insensibility by some Junior High scared straight movie in which all the denizens of Harlem are coming with their viper weed to take your lawn orname — well, okay. (Maybe we got that one right.) That first one. I don’t know what the hell is up with his replacement.

But largely, the labels of idealized dystopia had meaning. The taxonomy of ideal dystopia was coherent. And the propaganda was internally consistent.

How I long for ideal dystopia now.

For the coherence of neutron bombs, and ideological clashes. The campus sleeper cells and rogue AIs. The villains possessed of phenomenology. And oh, the garbage strikes. Remember the garbage strikes of your dream dystopia? As if sanitation and collective bargaining were still a thing, and the problem were merely being asked to live among garbage? As if the problem were just being treated like garbage, in a world of bleakest meaning?

Wouldn’t it be pretty to think so?

At first, and for months, I was caught in a thought loop. Which is the worst one? This isn’t a meaningful question, but it is a meaty one. You can chase it around your brain for hours at a time. The sons with their elephant tails? The labor secretary with his child sex trafficker pals? The press secretary who doesn’t? The VP who never did? The racist vampire? The rapist judge? The mildly discomfited Senators? The problem is a bottomless pit, and to get out of it, I had to take myself in hand. When you catch yourself thinking about which Trumpie is the worst one, I told myself, instead you need to think about which is the worst one to eat.

I thought this would be some nifty operant conditioning, and that I’d be reprogrammed not to think this thought ever again. Instead, I was consumed by the idea. I am consumed. Let’s eat them. Let’s fucking eat them. What else is there? Only this matters now. How shall we prepare their flesh?

When you get to hell, for you are going to straight to hell, you may find the Trumpies there, my friend. And you may find that they are you, or anyway are just like you, gossipy smokethings in the meadows of Asphodel.

But you won’t find me.

Because before I die, I’m going reclaim dystopia for the idealists. Old-fashioned dystopia. OG dystopia. Dystopia when it meant something. I’m going to roast those Trump motherfuckers on a spit, right in the middle of Times Square, and gorge myself on the hootenanny of their twisted flesh. 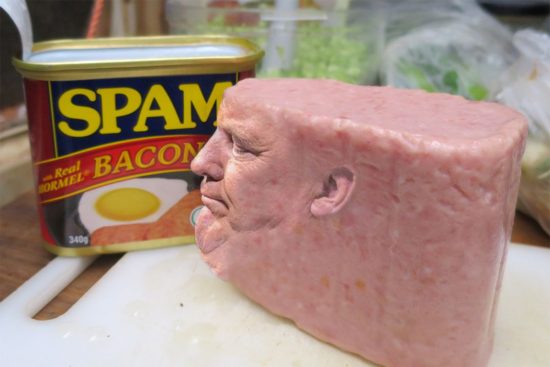 At first, I know I’ll be alone, and I’m alright with that. All the best cuts for me. Mike Pompeo, that portly Riyadh smirker? Au poivre. Assange on the bone. Devos MRE chunks pouch. Bannon tartare. Rich chunks of Haspel seethed in the milk of her mama. Torture nuggets of Wilbur Ross. Jugged Flynn. Steven Miller drained of blood for Finnish pancakes. Acosta en su tinta.

I will be patient zero. Alone on the Deuce, I am become the meat cantor, that others might follow. Chanting: rounds insides knuckle faces bottom rounds shank meat trimmings shoulder clods. Chanting a meat litany. Chanting a butcher’s hymn.

Soon enough you’ll join my feast. Chant with me a meat litany. Become with me a butcher’s hum.

God, how would you eat Sonny Perdue?

Trimmings says a blond guy. Aux duxelles.
Once he was a lawyer. His feet black with braintrust blood, his tie a mess.

Bottom rounds of Pence and Mother.

Rick Perry prairie oyster.
A kid and his dog have joined me.
Both in spasm, tearing off fur.

Kirstjen Nielsen — no boil her!
The meat widows proclaim shrewdly.
These days, we’ve all got extra mouths to feed.

We’ll chuck balls of ground Azar — and Lindsay Graham chuck, and soft-pressed Devin Nunes burger — across the ruins of a Jumbotron, all of us singing together. Humming a meat litany. Chanting a Butcher’s hymn. And in our reclaimed dystopia, we will eat and eat, until we burst, and our constituent bits reinfest the stars, and there is nothing left for hell.

“I’m a bit retarded like most Americans… The mere thought of a meal, another meal, rejuvenates me.”​ — Henry Miller, Tropic of Cancer

To view a video of Mandy Keifetz drawing political portraits — also part of her “Screed” installation — scan the QR code below. Or click here. 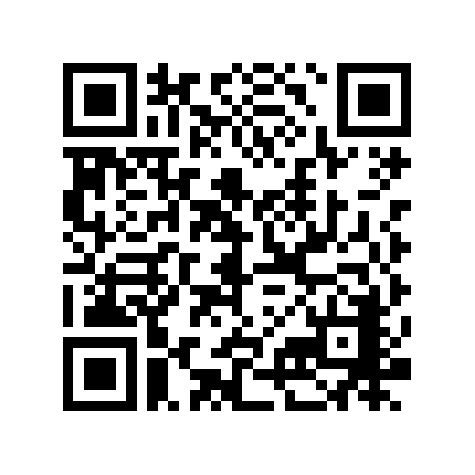