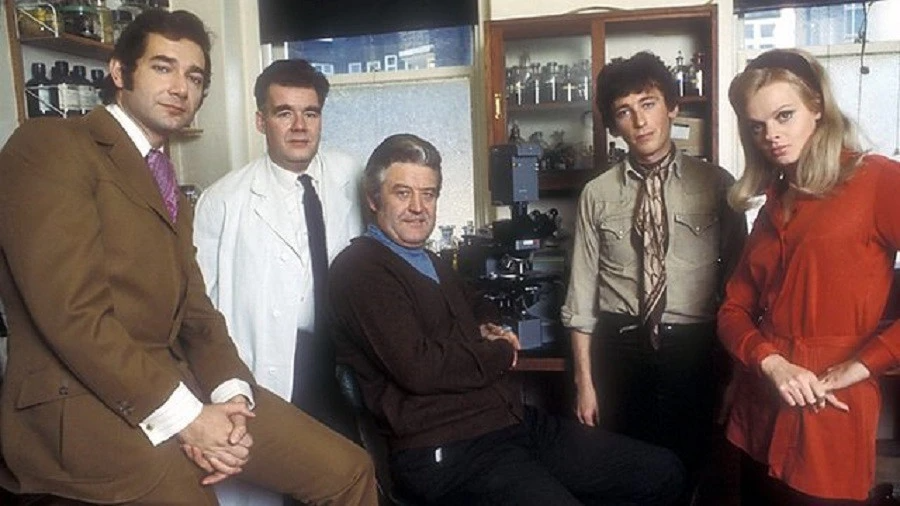 Welcome to the 1970s, an optimistic age of scientific progress which, unfortunately, is going to melt your flesh off with weird new chemicals while giant mutant rats chew your face.

British science-fiction TV drama Doomwatch focuses on the exploits of the ‘Department for the Observation and Measurement of Scientific Work’. Originally intended by the Powers That Be as a PR exercise meant to pay lip service to environmental issues, the department’s mandate to investigate potentially dangerous scientific research without actually stirring things up has been upended by its director, ex-Manhattan Project scientist Spencer Quist (John Paul), who has turned it into a thorn in the establishment’s side.

Wracked with guilt over his involvement in developing the bomb and his wife’s death from radiation poisoning, Quist’s outlook tends towards the pessimistic, earning the department its sarcastic nickname – ‘Doomwatch’, natch. But it turns out that Quist’s got a point, because as we repeatedly discover over the course of the show’s three seasons, plenty of scientific developments actually are likely to kill us, maim us, manipulate us or make us go nuts, and the establishment and big business are going to do their worst to avoid being held to account if they’re eventually found out.

With its often downbeat picture of a confusing new world and an atmosphere which is a defining example of the gloomy, haunted mood of 1970s British TV, Doomwatch remains hugely watchable, the overlap of power, money, science, conspiracy and manipulation which was its focus having revealed itself over the decades as perhaps the defining vector in modern life. The cast are uniformly engaging even when involved in high ’70s hammery, especially Powell, who left the series at the end of the first season with a convincing proof of the talent for martyrdom he’d later put to good use in Zeffirelli’s Jesus of Nazareth. Despite a fluffed line here and the odd bit of wooden BBC rep acting there, Doomwatch feels as modern and gripping now as when it was first broadcast, balancing awe at mankind’s capacity for inventiveness with despair and frustration at our short-sightedness and self-interest.

See All Posts by Richard McKenna

Richard McKenna is a Senior Editor at We Are The Mutants. He grew up in the visionary Socialist utopia of 1970s South Yorkshire and now ekes out a living among the crumbling ruins of Rome, awaiting rescue by the Terran Trade Authority.