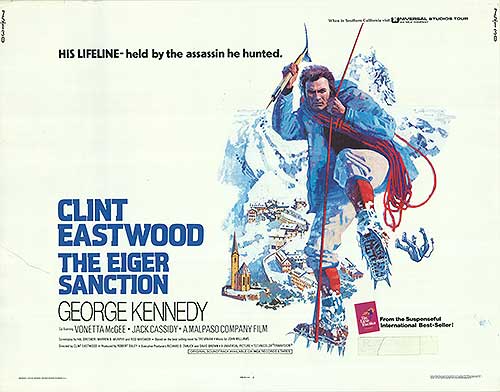 The story is preposterous yet excellent. Clint Eastwood plays Jonathan Hemlock, an art lecturer who turns out to be a former government assassin and expert mountaineer. Coerced back into service, he is to join an elite team of climbers to scale the hard north face of the Eiger, an almost 4000-metre spike in the Swiss Bernese Alps. The albino ex-Nazi director (!) of Hemlock’s former unit, C2, pressures him by threatening to expose the professor’s collection of untaxed masterpieces. There is also a cash sweetener that Hemlock can use to buy a Pissarro. Dragon, for that is indeed his name, lives in semi-darkness and survives on regular blood transfusions. Fantastic!

Hemlock agrees to take on the ‘sanction’, that is, the assassination of a member of the climbing team who murdered Dragon’s old friend. But he doesn’t know who the killer is – until the final minutes of the climb. Some details of the film’s thrilling mountainside scenes, such as the sudden onset of bad weather and use of the peak’s internal funicular rail line, are borrowed from an actual 1936 attempt by a German and Austrian team to tackle the north face. Five members of the ten-person team died on the ice.

This film is such a heady mixture of adventure and absolute tosh that it becomes irresistible, especially if you have any tolerance for the tough-but-silly Sean Connery James Bond films that preceded it (viz. Dr. No [1962] and You Only Live Twice [1967]). Roger Ebert noted that it was impossible to take The Eiger Sanction’s plot seriously “for more than fifteen seconds at a time,” while a more charitable New York Times critic called it “long, boring, but never foolish.” (That ‘but never’ should really be ‘and often’.) There is also, this being 1975, sexism and racism aplenty, including a seductive “Black chick” flight attendant called Jemima Brown, whom Hemlock chats into his bed, and a mysteriously silent Native American woman who trains the out-of-shape professor with grueling desert hikes and sly backward glances. The movie’s best performances come from George Kennedy and Jack Cassidy, both working side angles on the sanction.

In today’s world of CGI effects, super-quick cuts, and tedious head-shot gunfights, the realistic last act of the film is memorable, as the climbers deal with the peak and their mutual suspicions. Trevanian, the novelist who penned the original 1972 book (actually film scholar Rodney William Whitaker), worked on the screenplay, but later called the movie “vapid.” The book is pretty good, as long as you it read as Whitaker’s dead-on spoofing of espionage novels. A later riff on spy fiction, Shibumi (1979), includes supernatural powers, the board game Go, and more assassins. What?

Well, Whitaker was always goofing, but trust Clint Eastwood to take the Eiger material, and himself, way too seriously.

Fun fact: In the original 2014 John Wick film, before one of those head-shot circuses, a security guard can be seen reading Shibumi. Then Keanu Reeves shoots him.