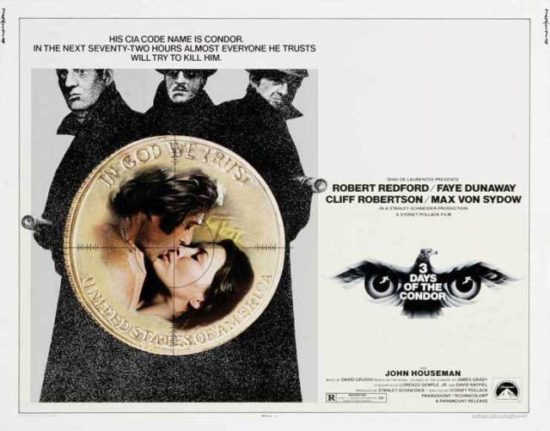 “When things quiet down, you’re really a very sweet man to be with,” admits Kathy Hale (Faye Dunaway) to her kidnapper, Joe Turner (Robert Redford), an hour or so into Three Days of the Condor. For an action-packed thriller, the sequences set in Hale’s apartment are oddly Bergmanesque: intellectually, emotionally intense explorations of belief (is Turner crazy, with his raving about the CIA and assassins?) and alienation (Hale’s bleak photographs send a signal that only Turner has ever been able to hear). Turner is a man playing chess with Death — portrayed by Max von Sydow, a sardonic killer who comes to care about his target. Hale’s decision to assist her captor is life-affirming. The sex is hot, too: Dunaway’s orgasm isn’t a narcissistic one, like in her next movie, Network; and Redford seems well aware that he won’t get any nookie whatsoever in All the President’s Men.

Although it was based on a potboiler, and adapted for the screen by Lorenzo Semple Jr., best known for his work on the Batman TV show, everything about Three Days of the Condor works brilliantly. Pollack and Redford had beome a high-functioning movie-making team, by this point. In fact, their previous film, the revisionist Western Jeremiah Johnson, explores a similar story line: A soldier who’s seen enough of war, and just wants to be left alone to live in the wilderness, winds up forming an ad hoc family; when they’re massacred, he’s devastated — and turns into a vengeful, unstoppable hunter. In this case, the soldier has become a bookish CIA analyst who reads spy novels and comic strips, looking for evidence that details about pending ops may have been leaked; his family are his fellow analysts, nerds with the best job ever; and the wilderness is the Upper East Side of a near-bankrupt New York City. Redford, one hears, was instrumental in shifting the story to one about the CIA’s ambiguous morality and the protagonist’s paranoia.

The paranoia is on point. Pollack’s hip, offbeat shots and edits keep us unnerved; it’s as close as anyone’s ever come to, say, Hitchcock’s The Thirty-Nine Steps — another great movie about a man on the run from the good guys and bad guys alike. Here, the MacGuffin is a sordid CIA plot to capture Mideastern oil. But the true enemy about whom viewers are urged to worry is signaled by the Data 70 typography in the title sequence, the omnipresent machine noise in Turner’s office, and the CIA’s business-like discussion of death and other “contingency plans”: It’s the mechanized, bureaucratized modern society to which the smart, stubborn, independent Turner will never adapt. (See my 2010 HILOBROW post about what the bicycle diagram on the wall of Turner’s CIA office signifies about his political outlook.) Which is why Von Sydow’s character, Joubert, charitably suggests that Turner — in whom he sees a fellow maladapted spirit — should become an assassin.

If this movie were made today, that’s exactly what would happen, and there would be many sequels. Instead, Turner takes a powder. “He’s lost, unpredictable, perhaps even sentimental,” Joubert muses, at an earlier point in the film. Yes: He’s the action hero whom we’ve never deserved.