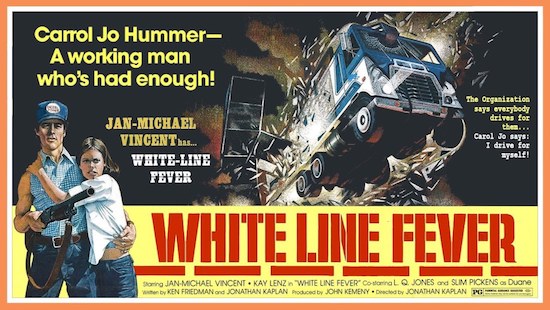 When you own your own truck, one thing you can do is crash it into shit. Maybe that’s not so appealing in and of itself. But imagine you’re a crusader, one of these hothead types who actually believes in something, and now you’ve got a shiny Ford WT-9000 semi to plow into the object of your pique. This is the premise and the promise of White Line Fever: that the steering wheel, especially when it sits afront tens of thousands of pounds of freight, is a moral instrument, an instrument of vengeance.

The late Jan-Michael Vincent stars as Carrol Jo Hummer, a strapping, fresh-faced youth just discharged from the Air Force. Hoping for an honest living, CJ invests in a rig, a gleaming, streamlined machine he calls the Blue Mule. No sooner has he packed his first load of avocados than trouble lodges itself in his grille. A trucking conglomerate called the Glass House — guess what their headquarters looks like — rules the Southwest with a chrome-plated fist, demanding that their drivers haul tax-free tobacco, slot machines, and the like. CJ is many things, but buddy, a racketeer ain’t one of ’em. When he turns his nose up at the graft, the Glass House takes it personally. Soon, House heavies are beating up his pregnant wife, burning down his house, and slipping a rattlesnake into his cab. Still, CJ won’t fold. Instead, a man of grit and tenacity, he arrives at the only logical conclusion: he must turn the Blue Mule into an arbiter of justice, driving it straight to the Glass House and through the corporation’s tall, leering, angular sign.

There was a moment in the Seventies when the mere thought of the long haul would quicken a man’s pulse. I can’t say why; I wasn’t born yet, and today, as the number of truck drivers falls to dangerous lows, the occupation has lost what romance it once had. It is a grueling, sedentary, solitary career. And yet for some years you could almost smell the diesel fumes wafting out of cinemas as Americans watched leather-faced toughs scraping by on the open road. Scenes like the climax of White Line Fever, in which the Blue Mule obliterates the logo of greed, explain why. Carrol Jo is an owner-operator, the nearest thing we have to a folk hero in the age of the automobile. Aiming his truck at the Glass House, he makes a fine sight, easy on the eyes: his cerulean semi careening through the night sky, its headlights and clearance lights aglow, haloed for an instant in the glinting cloud of debris from that which it has destroyed.

See All Posts by Dan Piepenbring

Dan Piepenbring is the web editor of The Paris Review.