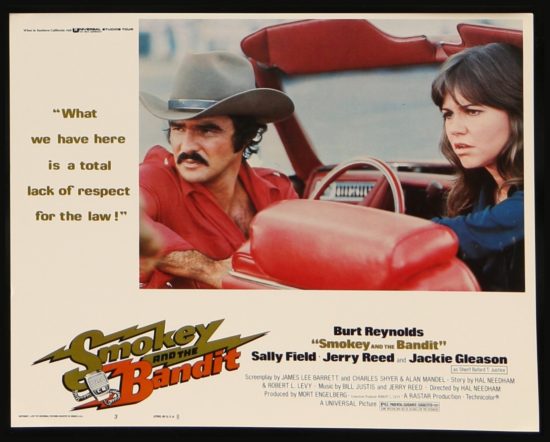 On the surface, Smokey and the Bandit is a lighthearted road movie. But in the substrate, as so often in Seventies films, something darker, grittier, and altogether more interesting is going on.

Bandit (played with easy charm by Burt Reynolds in tight flares) has only just managed to escape the working class into the entertainment precariot as a “truck rodeo star.” He’s dozing in a hammock when he gets the challenge from some slightly richer bandits to run a caper: bring 400 cases of Coors east from Texas to Georgia for their next shindig in only 28 hours. This is illegal. Bandit says yes.

Smokey and the Bandit was filmed at the height of the CB radio craze in the US, where truckers — and anyone who shopped at Radio Shack — could self-broadcast and chitchat over various local and otherwise unused channels of the 27 MHz radio band. Truckers developed their own lingo, so heavily used in the film it almost requires subtitles. But basically: smokey means cop (because the feds wore hats like Smokey the Bear); see also: bears, bear in the air (police helicopter).

Bandit and his sidekick Snowman (singer Jerry Reed, who also wrote the theme song) head for Texarkana at speed and pick up the beer with no problem. Snowman actually drives the 18-wheeler; Bandit drives a Thunderbird, speeding and making showy hockey stops to distract from the speeding truck. In the utilitarian calculus of the road, they gamble that the cops will chase the flash instead of the rig.

Mishaps ensue, and gradually, as Bandit acquires a second sidekick in failed chorus line dancer “Frog” (Sally Field), the plot becomes slightly richer. The cops — correction, smokeys — are on their tail, not because of the speeding, but because Sally Field is a runaway bride from a Texas sheriff’s son, and sheriff senior (played with a pathos more grim than antic by Jackie Gleason) will not stand for that. Thus begins a multi-state, multi-character car chase that will not see so many cop cars wrecked until the Blues Brothers take it to the limit in 1980.

But flip the film over and look for the union label. Despite heavy marketing to the economy sector, the Adolph Coors Company was notoriously anti-labor, and the year this film came out an AFL-CIO boycott of the beer had just been declared. Outside the film itself, but within the cultural context of its production, Sally Field was just two years away from her star turn in Norma Rae (1979), where she would own the screen as a real-life heroine of the textile labor movement.

One might think that with all the hard-working, hell-raising antics of Bandit and buddies, that they might well refuse future boss-driven capers and turn instead towards fomenting class-consciousness. CB radio after all was, and still is for that matter, a secure P2P communications channel, especially with (as demonstrated in the film) lingo encryption and prearranged channel-switching. Breaker breaker 1-9: organize!