This post is an addendum to the CONVOY YOUR ENTHUSIASM series, which analyzes and celebrates some of our favorite action movies from the Seventies (1974–1983). 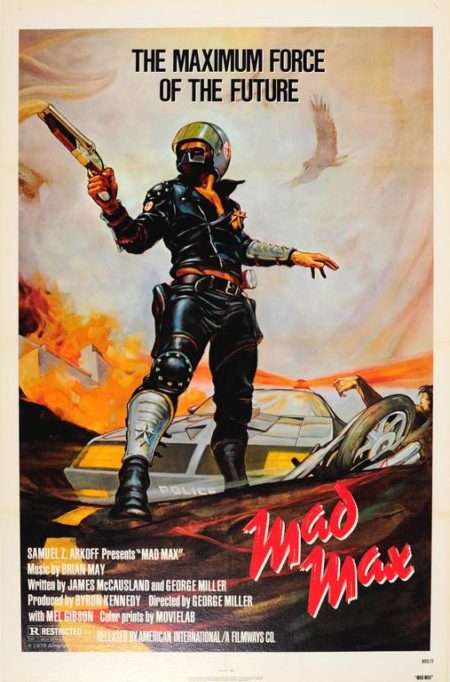 Mad Max blew onto American movie screens on a scorching sirocco in 1980. For anyone who suspected that disco wasn’t our future, and knew that Han, Luke and Leia were just a pretty story, suddenly there was an alternative looming reality blaring at us from Australia: desert, depravity, roadburn, madness, speed speed speed.

Our hero is Mel Gibson, something that only later we would realize was deeply unfortunate. Then he was young, unknown, gorgeous and objectified: every time he’s on screen at home with his lovely wife, she’s dressed and he’s shirtless, maybe wrapped in a towel. Max starts out as a decent cop with a wife and child and ends up — after a film full of his interactions with a motorcycle gang led by a charismatic, fucked up dude called Toecutter — alone, and the titular pissed off/crazy man.

In this world, declaring itself on screen to be coming just A FEW YEARS FROM NOW, society is functioning enough so that a police officer tends houseplants at his apartment, but it’s broken down enough that a couple of amped up freaks can steal a cop car and deliberately set a path to their own annihilation, cackling madly all the way. So much motion fills the screen, yet we know from frame one what’s happening and where the danger lies; George Miller, who would make Max movies a lifetime project, is a genius.

The vistas are stretched wide, long and bare Australian horizons that look like America’s high deserts and were inspired by Sergio Leone’s spaghetti westerns. Not that I knew any of that when I first saw it on the revival circuit in high school. The film was shown without the proper projector lens that would have stretched the anamorphic widescreen image to its proper proportions — so everyone was squished tall and thin. It was all wrong narrow angles, as if every scene were being shoved through a chute with manic force, adding to the sense of otherworldly displacement.

As if that wasn’t enough, it also had the worst dubbed audio track ever, mismatched dialog that could be almost impossible to hear. Yes, Australians speak English, but the distribution company was afraid Americans (pre-Crocodile Dundee) wouldn’t be able to decipher the accents. The plot, which involves corruption, destruction and betrayals, was pretty hard to parse — luckily, the racing cars and fiery crashes were not.

And while this film spends much of its time in civilization and even at the beach, it’s the dystopian near-abandoned towns, the anarchic motorcycle gang, the lawlessness in the dry desert landscapes that made it special. So special that Max’s dystopia would be successful and addictive and last for four films, so far. Who is to say this mad desert destiny is not just a few years from now, after all?

See All Posts by Carolyn Kellogg

Carolyn Kellogg is the former books editor of the Los Angeles Times; her work has been published widely. A judge of the 2019 National Book Award in nonfiction, she lives in Alabama.