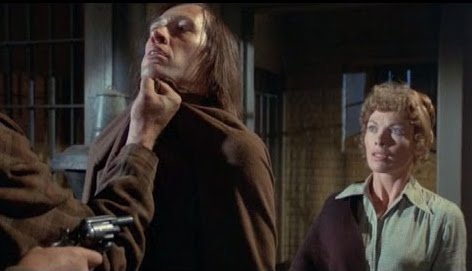 A landmark moment in American Orientalism occurred in the eighth episode of the second season of Kung Fu, in 1973, right about when it began to become apparent that postwar prosperity was going into reverse, the New Deal order was falling apart, and the American century wasn’t going to work out as expected. That’s the episode in which Kwai Chang Caine, the renegade Shaolin monk who wandered across the Old West in prime time, said, “I seek only to become a cup empty of myself, filled with oneness.” Imagine Kojak or Mary Tyler Moore saying it, or even trying to understand Caine when he did. He seemed content to drift and contemplate, but people were always demanding — usually right before or just after he kicked somebody’s ass — that he explain what he wanted, what he was about, and he always had a satisfying answer.

Caine, played by David Carradine, made a show of earnestly trying to avoid violence, but he was forever encountering louts with feathered thickets of Seventies hair who obliged him to knock them in Peckinpavian slow motion through breakaway saloon tables and other period-appropriate wooden contraptions. Carradine’s kung fu, like his halting fake-Chinaman diction, was stiff and unpersuasive, though he had a stylishly casual way of catching arrows in midflight, gently snapping them in two, and discarding them with an expression that said, “Again with the rustic feathered darts, my cross-Bering Strait brothers?”

Growing up in South Shore on the South Side of Chicago, I took note of the way Caine covered ground, going where the contours of the land or his fancy took him. He effaced himself whenever possible to reduce the friction of his passage, but he also reminded me that if you did find yourself singled out and hauled to center stage for a potentially humiliating scene, then your best bet was to double down on who you were — be it a half-Chinese drifter in the Old West or a white kid with glasses on the Jeffery 6 bus. Soulful unbelonging, even forthright goofiness or freakiness, was a better option than scrambling abjectly to conform to the expectations of those who had cornered you, a self-betrayal that would only cause you to hate yourself and, anyway, wouldn’t save you from what you had coming.

When drunken cowboys closed in on you yet again in yet another saloon, you didn’t beg for mercy or try to out-bluster them. No, you sought to become a cup empty of yourself, filled with oneness, and did your best to make it to the next ad break on the strength of whatever counted as the equivalent of your Shaolin skills.