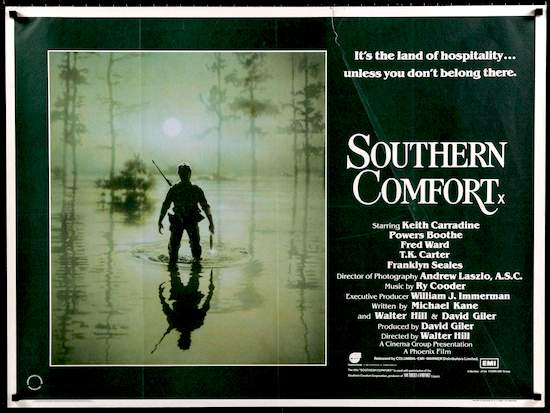 It’s an old war movie template: a motley band of warriors lost in enemy territory, reduced, disarmed, obliged to trek to safety using only their wits and courage. But where is safety to be found? All any of them can do is make a guess, so who among them is to be heeded? Precedents like Desperate Journey (1942) or Lost Patrol (1934) tended to be derring-do, sabre-rattling affairs.

The critical and box office success of Deliverance in 1971 had already complicated the city-folk-lost-and-outgunned-in-the territory-of-the-rural-other format somewhat, questioning certain of the imperialist assumptions of the form. Ten years later Walter Hill came along with this unashamedly lowbrow genre-flick riffing on the theme. Here it’s a bunch of yahoo national guardsman, skiving off on a weekend exercise in the swamps of Louisiana. They ‘borrow’ some boats left unattended by Cajun hunters to get across a bayou, then a guardsman playfully shoots blanks at the disgruntled Cajuns who have appeared back on the bank. Bad move. The Cajuns have real bullets. Payback begins. A guardsman is shot dead.

The terrified men schlep on through the swamp, desperately clutching their useless weapons, as they are picked off one by one. (Look out for some punning on the guardsmen’s names and their various modes of death.)

Annoying habits quickly become fatal flaws. Group cohesion breaks down. It’s a ‘We’ve met the enemy and he is us’ kind of deal. Soon it’s every man for himself. Not quite — stick together to survive, right? It’s become a social laboratory yarn. So can the relatively pure of heart form a sub-bond and save themselves?

Young Keith Carradine can’t help but be among the pure of heart, of course, and Powers Boothe (the evil Cy Toliver in Deadwood) just wants is to be left alone. Is that enough to exempt him from the karmic punishments due to operatives of the military industrial complex?

This is a movie with no real female parts and virtually no female dialogue, and modern viewers may experience relatability issues. Director Hill, always drawn to masculinist fables, to his credit, never buys in. His male collective isn’t a band of bros so much as a ship of fools. The real subject is powerlessness. Expect zero in the way of male heroics.

The men finally stumble into a village where a big, loose Saturday afternoon party is going on, a rockin’ Cajun band is playing (the legendary Balfa Brothers, with Marc Savoy), and pigs are being slaughtered for the feast. Beers are thrust into the soldiers’ hands, and a nice girl invites Carradine to dance; it’s a vision of community from which the men themselves are existentially exiled. But wait, aren’t these the same folk who were trying to kill them back there a way? Naw, these are the ‘good Cajuns’ says Carradine. How much he knows.

Ry Cooder’s slide guitar soundtrack is delicious, by the way.

See All Posts by Peter Doyle

Peter Doyle is an Australian author whose books include The Big Whatever, Crooks Like Us and City of Shadows: Sydney Police Photographs 1912-1948.