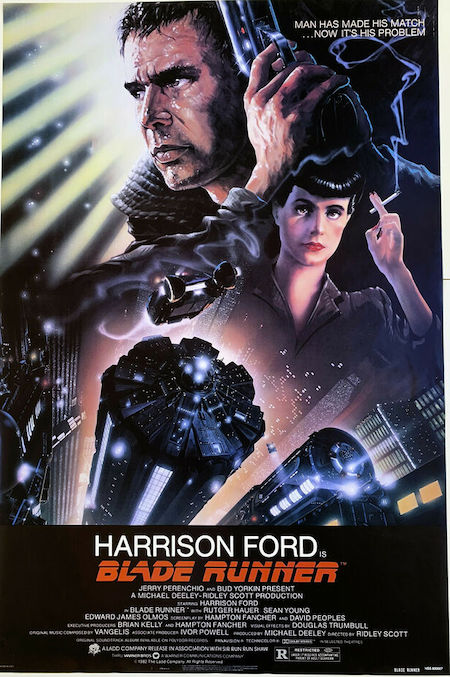 My earliest memory of Blade Runner is my father trying to cut together a master edit of it on his Betamax. He did this, occasionally — he spent years trying to cobble an edition of Close Encounters together from TV and rental releases, splicing the Gobi Desert sequence in, tweaking Roy Neary’s ending until its selfishness became forgivable through transcendence. Both stories are about men who want nothing more than to get away from their circumstances. Deckard has mysteriously “been quit” when he’s dragged back into his former boss’ office, and even his former colleague tries to explain the desire to get out of LA before exiting it permanently: “Maybe you’re fed up,” he says, wearily. In Close Encounters, Roy abandons all responsibility and escapes to the stars. In Blade Runner, Rick and Rachael simply get in a car and drive away, continuing their affair with the same queasy optimism with which Ben and Elaine catch their bus at the end of The Graduate. Depending on which cut of the film you watch, they actually drive straight into the opening of The Shining, offering the prospect of a mashup too delicious to ignore.

Like The Shining, Blade Runner is fundamentally a film about terrible fathers. Deckard orbits the Frankenstein narrative unfolding before him, by turns a Biblical or Freudian parable of a son destroying his father, the story of an Adam who, like Milton’s, chooses his own kind over his creator. In Blade Runner, that original sin becomes a capital crime. It’s impossible not to read LAPD history into the film. The “skinjobs” are simply the next in a long line of groups targeted for removal by the carceral state. Not much of Philip K Dick’s novel Do Androids Dream of Electric Sheep? remains in Blade Runner, but the politics do. The film makes it abundantly clear: if you’re not cop, you’re little people. Patriarchal power exerts itself over and over again throughout the film, from the marginalization of the Replicants to the pressure on Deckard to kill them to Tyrell’s deception of Rachael to Deckard’s assault on her, a violent expression of his perceived powerlessness. It’s the one scene in the film when Deckard actually seems like the stone-cold killer his superiors insist he is.

Unlike most action films, Blade Runner relies on Deckard’s physical and emotional vulnerability to create tension. He’s not a badass. He’s not a martial arts master. He’s weaker on every level than the creatures he’s hunting, and he knows it. As such, it makes sense that Deckard’s one act of rebellion at the end of the film is to lean into his tenderness. Like the Replicants, he chooses to love. And that is the one choice the powers that be cannot abide. There are many science fiction films about terrible fathers — it’s baked in, from Mary Wollstonecraft Shelley’s DNA. But there are far fewer about rising above that trauma and choosing something different.

Perhaps for this reason, Blade Runner works best as a series of vignettes, not an action film or even a science fiction film. Unlike Ridley Scott’s other seminal science fiction film Alien, it has little sense of direction or pacing. This is because Alien is properly a horror film in a science fiction setting, with a menace that forces the plot and characters to move. Similarly, Star Wars is an adventure film dressed in science fiction costume, and moves with a sprightliness that must have felt refreshing after the plodding pace of ’70s realism. Rather, Blade Runner moves at the langorous pace of an Alphaville or La Jetée. It’s a noir film in which no real crime has been committed, a police procedural in which the cop does not want to do his job. Blade Runner moves at the pace that its protagonist moves: reluctantly, grudgingly, bullied along by the relative industriousness of its nominal antagonists. It’s a series of realizations, most of them crushing, about what is real and what isn’t.

See All Posts by Madeline Ashby

Madeline Ashby is a science fiction writer and futurist living in Toronto. Her most recent novel, Company Town, won the Copper Cylinder Award and was shortlisted for the CBC Books Canada Reads competition.