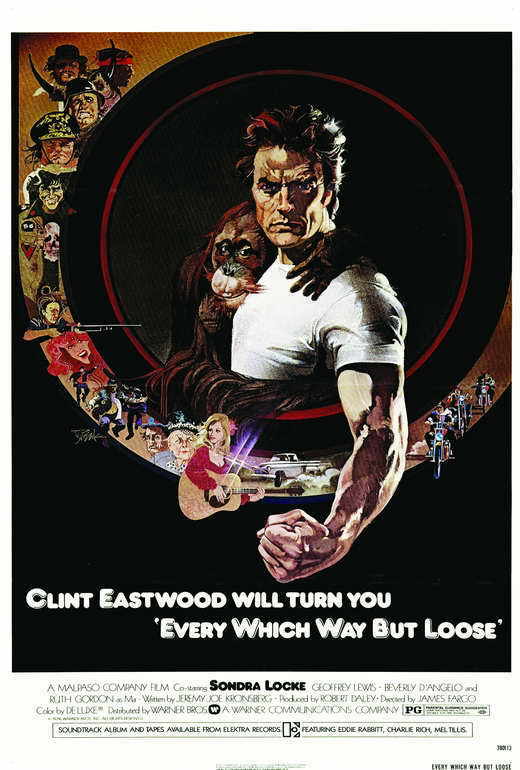 The suggestively named Philo Beddoe (Clint Eastwood) is a trucker who doesn’t do much trucking, and instead drives around with his brother and manager Orville bare-knuckle boxing for cash and getting into bar fights. He has an orangutan, Clyde, that he won from a zoo in the desert in a match. He meets a girl, beats up some Nazi bikers, loses the girl, and they drive around the West looking for her as hilarity and pugilism commingle.

At its core, Every Which Way but Loose is a picaresque that takes place in a version of America that was just wrapping up: a pre-Reagan America full of dusty corners, vague lawlessness, fraught but meaningless encounters. It’s Rabelais, but with Eastwood as Gargantua, and an orangutan as Pantugruel. Instead of the impending end of the Renaissance, it’s the end of random, weird, dumb America; instead of sausages, it’s punching people in the face.

The Nazi bikers who Clint keeps beating up (and stealing — and then selling — their bikes) glom together and follow him across the country as he lazily searches for the country singer he (sort of) fell for. The Washington Generals of Nazi biker gangs, they get ruined in a bar fight, shot at by Clint’s mom, and finally pummeled en masse by Clint while Orville destroys their bikes. Meanwhile some cops that Philo accidentally (not knowing they were cops) beat up in a bar are also on his tail. Pursued by the law and the lawless, but, either way, pursued by idiots. When a cop finally catches up, he is dispatched with a fish to the face, his truck sunk in a lake.

It’s all played for laughs — too silly to be camp, too serious to be slapstick — but it isn’t exactly funny. The cops and bikers are bad, certainly, but too ineffectual to be antagonists in this story that might not even have a protagonist. It’s not camp or rom-com, western, action or road movie, though it waves at all of them (sometimes gently, sometimes fervently). Too serious to be whimsical, too whimsical to be taken seriously, Every Which Way but Loose could be accused of repeatedly undermining its own purpose if it had one. Unlike most movies where weird thoughts about them occur to you afterwards, even while watching this you feel that maybe it was stuck together like Queaneau’s Elements of Style and, somewhere there are a thousand more versions of the movie where the scenes are jumbled differently. I bet most of those are pretty good, as well.

The final fight is against a bare-knuckle giant, a sort of tall tale who has been mentioned throughout the movie. But he’s old, washed-up, the crowd turns on him as Clint is handling him fairly easily — they mock the old guy and you hear them plot to turn Clint into their new meal ticket. Clint realizes that his work is being commodified — that what he was experiencing as rootless beating the shit out of people is about to make him just another cog in a parallel economy every bit as exploitative as the one he was resisting (or ignoring). Or maybe he sees his end laid out and decides to chart another course — refusing to be the inevitable collision with modernity in this (small) tall tale. So he takes a dive.

The America where you can just wander around doing fuck-all is gone. Now we have reasons for things, expectations that our actions are considered so as to lead somewhere. Which is funny, since we’ve all destroyed our attention spans and are even less capable of this sort of structure than we were in 1978. Yet we persist at bludgeoning our giant square selves into stupid round holes. If I was in charge, all orangutans would be provided with pugilistic truck drivers and everything would be pointless again, as it should be.