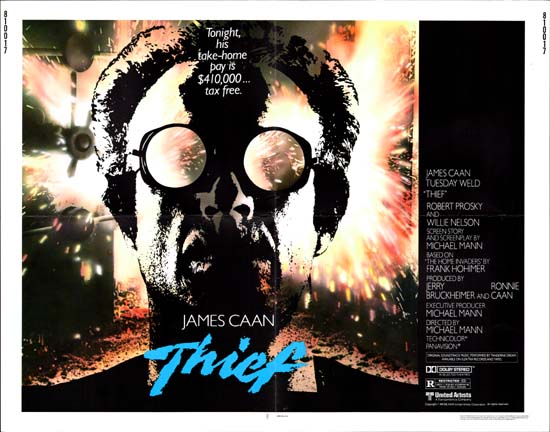 Tuesday Weld is bugged. She is annoyed. There is a passive surveillance device in her home. She appears confused as to which life decisions mapped her route to this troubling moment.

Well, not Tuesday Weld. Jessie is bugged. Jessie is the woman Weld portrays in Michael Mann’s 1981 film, Thief, a slow-burn thriller punctuated by moments of intense physicality. Anxious about this invasion of privacy, Jessie turns to Frank, the titular thief played by James Caan, and asks, “What does this mean?”

Frank replies, “It means heat.” What Frank means by “heat” is “attention from formidable adversaries on both sides of the law who were my dowry when you and I became a couple,” but he might as well have said, “It means Heat and Manhunter and The Insider and Collateral.”

For if Jessie spends Thief precipitously close to the end of her line, the movie marks a beginning for Mann’s. Thief is Mann’s feature film debut. So many storytelling fixations that inform Thief will surface repeatedly in Mann’s work to come, among them: masculine violence, dishonor among thieves, the narrative momentum of money, the transcendent beauty of the urban landscape, and an intimate dance between synthesized and environmental sound. (Thief’s score is by the early electronic band Tangerine Dream, plus a track by Craig Safan emulating Pink Floyd. There is an opening scene of rainy fire escapes and vaporous sine waves that fully channels Blade Runner a year before that movie’s release.)

Frank is an ex-con trying to leave crime behind in a Chicago where cops moonlight as criminals. Frank is what students of action films and of physics recognize as a classical model of potential energy, a classical model bearing a grudge and a pinky ring (both of which should have tipped off Weld’s Jessie). When that potential energy is triggered, it metamorphoses into action.

The action in Thief unfurls against twinned adversaries: man versus man, and man versus machine. The machines are vaults holding gems and other currency. They are attacked with professional ferocity by Frank and his henchmen (among them James Belushi), employing drills, flames, and muscle. As in any heist film worth the name, a substantial amount of Thief involves the refinement of a plan that may very well go wrong.

The machines are brutalized. The men have it worse. They are pummeled and shot after first being hunted and, most importantly, humiliated. When Belushi’s character is gunned down in a car lot, his body is forced back in an exaggerated slow motion that reads as stop motion: gangland as choreographed by Ray Harryhausen. When the film’s heavy, a mercurial crime boss portrayed by later Hill Street Blues softie Robert Prosky, is shot in the head, the movie pauses for a reflective split second of visual whiplash.

In contrast to the rehearsed violence perpetrated against machines, the violence between men in Thief is slowed not in advance but immediately upon impact. Mann’s lesson is clear: this sort of violence cannot be assiduously prepared for; it must be studied as it unfolds.