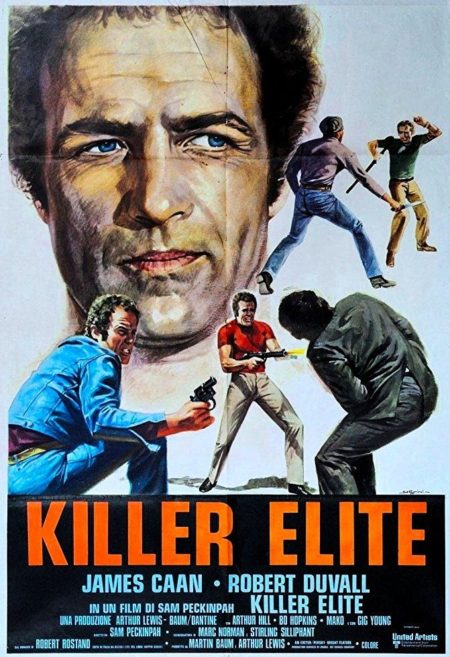 I’ve never understood the thrill of the squealing-wheeled car chase, the joys of near-miss bullets zipping past intact temples, or the ever-increasing tension of an extended pursuit on foot through backyards, shipyards, junkyards or any other yards, no matter how industrial or exotic, even with the added layers of fence climbing and dogs snapping at heels. I think of action films as in the same category as mainstream porn: The genre does not in any way require a plot, so I’m always a little charmed by the earnestness involved when someone works ones in — even if it’s choppy. The Killer Elite has such a plot.

Some of it’s just there to get topless women onscreen within the first five minutes or to explain the presence of ninjas throughout — but parts of it seem like genuine, if shallow, attempts to explore the complexity of manhood and heterosexual male bonding. This plot’s primary themes are how someone can be your best friend and still shoot you, and that vitality and productivity are synonymous (with each other and with manhood, but in a nuanced way.)

This is a very slow-moving action film.

The main character, played by James Caan, is intentionally shot — the intention is to maim permanently, not kill — by his roommate, best friend and closest colleague, played by Robert Duvall. He’s shot on the job, for money. Because that’s what these guys do for a living: shoot people for money. Though the plot definitely explores betrayal, in the end, even though “revenge” is gotten, Caan kills Duvall with little malice, maybe even a little wistfulness. The real betrayal is higher up the food chain. Allegorically, if you want to go there, it’s a model of structural violence trickling down and becoming actual violence between parties that have no ill will for each other.

The actual action is pretty cheesy so I won’t bother with it beyond admitting that it exists with regularity and noting that there are some wholly weird, slapstick scenes (one with a car bomb and a cop; another with a flasher in an airport) that make no sense whatsoever.

My favorite choreography was not that of the fight scenes or car chases, but the hospital choreography when James Caan’s character gets rushed into treatment after being shot.

At least a third of the movie is about Caan’s character getting his mojo back after being shot. His sense of worthiness/productivity is rebuilt through failure after failure observed stoically by his new girlfriend — his nurse from the hospital. He falls down and he gets up. Falls down, gets up. It’s what gets him back on mission, and what makes him a man.

See All Posts by Heather Kapplow