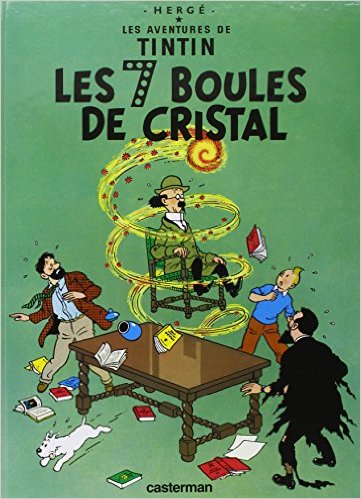 A group of ethnographers return to Europe from an expedition to Bolivia and Peru. One by one, each falls into a mysterious coma. Shards from a shattered crystal orb cover the floor around their bodies as they’re discovered. All that wakes them from their narcoleptic prison are periodic nightmares and seizures. Can this be the curse of the Inca priest Rascar Capac, “he-who-unleashes-the-fire-of-heaven”?

To find that out you’ll have to read the book. One thing I can tell you is that the production of this adventure of Tintin, Captain Haddock, Snowy and friends was itself interrupted by nightmares for Hergé. It began serialization in 1943, in the Nazi-controlled newspaper Le Soir, but was put on hold due to Hergé‘s health problems. The story resumed for a brief spell until Hergé was accused of collaboration in 1944 and ceased work until he could clear his name. Following his acquittal in 1946, The Seven Crystal Balls picked up from where it left off in the French newspaper Coeurs Vaillants.

The first of a two-part adventure – Prisoners of the Sun is the sequel – The Seven Crystal Balls marks the halfway point in Tintin’s life. The occasionally questionable politics of the early adventures was pushed out of focus during the war years, making way for H. Rider Haggard-style plot and hints of supernatural suspense. This tale, which takes Tintin from Belgium to deepest Peru, would be the last of Hergé’s pure adventure yarns. Tintin’s following escapade, The Land of Black Gold, which began ahead of The Seven Crystal Balls but was cancelled at the outbreak of World War Two, would signal a shift back towards political themes before ultimately moving into his late existential phase.

The Seven Crystal Balls is by-and-large a domestic adventure, much of it it set on Haddock’s Marlinspike estate, which provides contrast with the rugged Andean mountains in Prisoners of the Sun. The story, which shifts effortlessly between slapstick comedy and horror, sees Hergé’s work become more detailed in its execution, his famous ligne claire style underpinned by meticulous research and drawing from life. Two large frames in particular stand out. One depicts a music hall illusionist’s act being disturbed on stage by Haddock, the other shows the seven explorers in a hospital ward experiencing terrifying fits. Both feature an extraordinary depth of focus, peripheral detailing and compositional balance that is cinematic in execution – an artistic vision closer to Citizen Kane than comic book. 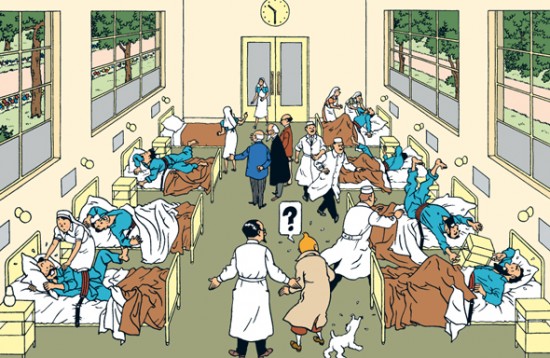