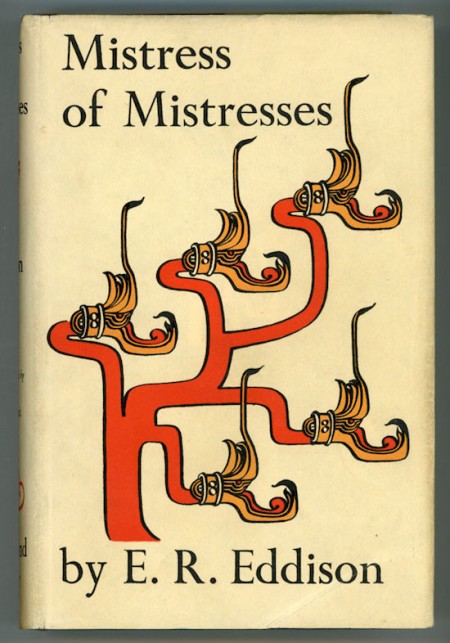 Toward the beginning of E.R. Eddison’s Mistress of Mistresses, the first of his Zimiamvian trilogy, Duke Barganax destroys a painting, enraged by his inability to capture his lover Fiorinda’s countenance. But does beauty’s value lie in its ephemerality?

“‘Would you be ageless and deathless for ever, madam, were you given the choice?’ said the Duke, scraping away for the third time the colour with which he had striven to match, for the third time unsuccessfully, the unearthly green of that lady’s eyes.

‘I am this already,’ answered she with unconcern.”

In Zimiamvia, beauty (or, rather, Beauty personified, the “awful, gold-crowned, beautiful Aphrodite” of Sappho and Homer) is the One for Whom the world was made. Eddison’s lush, baroque prose; his impossibly heroic characters; his intrigues and battles; all are in Her service.

Eddison was a British civil servant who wrote after hours. His first and best-known novel, The Worm Ouroboros (1922), is a joyous book, with a rich treasury of antique vocabulary lifted from Webster and medieval poetry carrying along an epic, endlessly recurring plot inspired by Eddison’s beloved Eddas. But the Zimiamvian trilogy is something else, a working out of Eddison’s idiosyncratic Spinozan moral philosophy.

“I must have danger,” says Lessingham, a character who makes a mysterious appearance in The Worm, but who in Zimiamvia (after a mystical “overture” in which he dies in Norway) is another face of the hero. Lessingham supports his villainous cousin’s plottings against the Duke for his own ends. Alliances are made and traduced — and love, too, is made, but never betrayed. So much for the plot. Eddison will stop for a chapter to describe the hangings of a throne room, or to let his characters linger over a meal (the second book of the trilogy is called A Fish Dinner in Memison), over the peeling of a pear, while discoursing of the world’s truths sub specie aeternitatis.

“‘The vine, the woman, & the rose’: these are good, absolute goods:” Eddison wrote, “on that I stake my salvation. I had rather be damned with Sappho & Egil than go to heaven with all the pale mystics that ever withered.” Readers can judge if this beautiful novel captures these Eddisonian verities, which are, necessarily, as the Duke puts it, “unpaintable, too, like as are most things worth painting.”