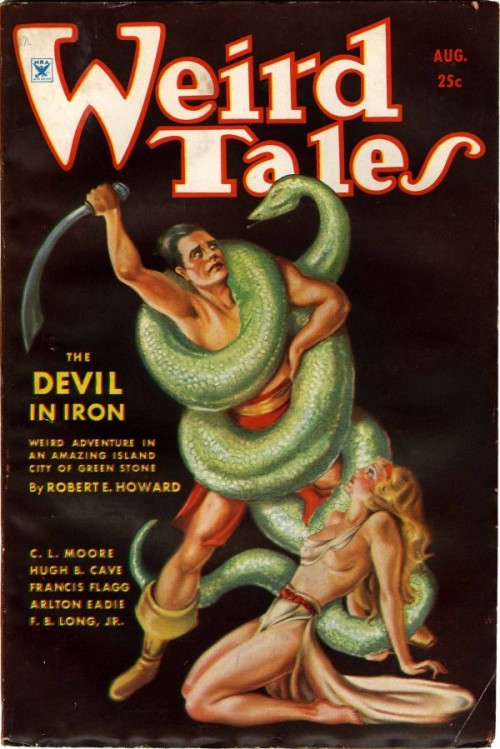 Conan may be an anti-hero. Maybe better to call him an anti-hobbit?

Hobbits are dragged from their holes into epic quests. Hobbits are homebodies — nobodies, really. By convention, this singularly capacitates them to take resilient, world-significant action. Conan, by contrast, is active — seizing the day, the crown, the comely wench. His larger-than-life Somebodiness suits him to the purely reactive role he always plays when the mask is pulled back to reveal the skull. We humans are nothing, in light of what lurks beneath.

Just as there are no Tolkien novels about hobbits doing what hobbits do — potter about — there are no Howard stories about Conan doing what he does — slaughter a lot. “Crush your enemies. See them driven before you. Hear the lamentations of their women.” We remember those lines from the first film. Conan’s anti-philosophy of barbarism, in Howard’s own words, was wordier, but comes to the same: “Let me live deep while I live; let me know the rich juices of red meat and stinging wine on my palate, the hot embrace of white arms, the mad exultation of battle when the blue blades flame and crimson, and I am content. Let teachers and priests and philosophers brood over questions of reality and illusion. I know this: if life is illusion, then I am no less an illusion, and being thus, the illusion is real to me. I live, I burn with life, I love, I slay, and am content.”

We never see it.

Contented hobbits are boring. Contented barbarians are bullies. There can be no Conan story about our hero cruelly cleaving hordes of helpless humans. True, he claws his way to the kingship of Aquilonia, but only so the palace can serve as a backdrop for a desperate night-fight against Thoth-Amon’s demon. He is last man standing on a snowfield of Vanir and Aesir warriors — because where else would a wintry weird appear to beguile him to unnatural doom? He reaves the Black Coast for fun and profit, luscious queen at his side — as prelude to getting upriver on the black waters of Zarkheba, which is death.

Every tale confronts Conan with the philosopher’s fear that The Truth is Too Inhuman For Humanity. Conan survives each tale by sidestepping that, by being more beast than man.

It’s not just the serpent god Set’s fault, but Crom’s, that Cimmerian enthusiasms must be curbed in beastly fashion.

“Better to be silent than to call his attention to you; he will send you dooms, not fortune! He is grim and loveless, but at birth he breathes power to strive and slay into a man’s soul. What else shall men ask of the gods?”

Conan swears by a Lovecraftian entity.

We do not give enough sincere thanks to Crom for keeping Conan fun — that is, on the run. This is a world in which natural-born beasts contend with unnatural ones. No room for humanity. It’s quite satisfying.

See All Posts by John Holbo

John Holbo is associate professor of philosophy at the National University of Singapore.