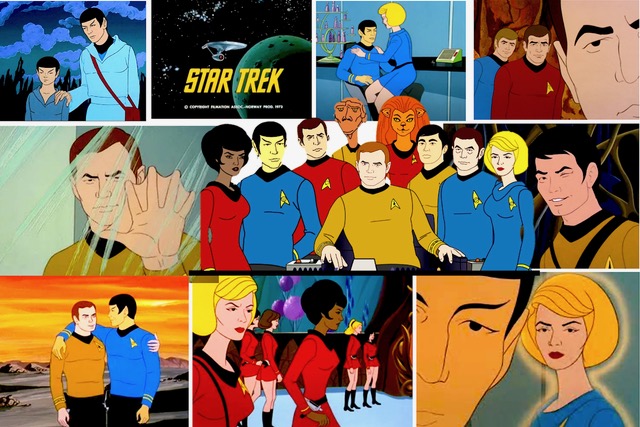 They said it was too childish, as if no Tribble ever purred, and no Gorn ever lumbered his latex with murder menace.

They said it was too silly, as if threats of Corbomite against a space-toddler masked as a monster was somehow enlightening.

They said it was cheap, low-grade animation, as if they had never covered up their mouths, or practiced Survival Ventriloquy, or hidden themselves behind shrubbery to avoid the profligate ritual of moving one’s mouth while speaking.

They said it was weird when ‘The Infinite Vulcan’ episode debuted a 25ft tall Spock clone, and concluded with Kirk and Sulu discussing the Asian stereotype of inscrutability, culminating with Sulu, for the first and last time ever on Star Trek, breaking the Fourth Wall with a cheeky wink to all of us he knew, in that moment at least, were sitting and watching at home, and they were kind of right about that, in the sense of weird as a recognition of the uncanny forces that blend us to Meta-Imagined locations, in sublime process as yet uncovered.

And they said it was non-canon, that this wasn’t really the final phase of the Five-Year Mission, as if the authorised name, characters, settings, voices and continuity coherence was a bizarre accident, as if a bunch of colours, lights and sounds had jumbled together, coalesced into mutated weirdness, and begun an epic search for its home, it’s creator, for its Perfect MathMom.

And I say that it’s probably the best Star Trek series ever made, and a reminder that this thing still has value and capability, even if the most recent TV offerings largely consist of people invoking the inspirational wisdom of fridge magnets, interspersed with crying.

But it can be reasonably asserted that the animation is ‘limited’, in the strictest technical sense. Budgets were massively stretched, largely because Filmation Studios had not accounted for Leonard Nimoy’s adroit shop-stewarding of the supporting cast into a show that had originally sought to abandon them. Nimoy’s firebrand collective bargaining ensured Nichols and Takei made it on screen, and Koenig got a writing gig, and and we should remember that every inexplicable close-up, every stationary silhouette, and every ‘Barbershop Staging’ of dialogue between backs of heads went directly to the most needy members of the original Star Trek cast, several years before they commanded five-figure appearance fees at conventions.

Would it be fanciful to say that the abstracted facial imagery, likenesses made minimal with a few masterful strokes, expression curtailed like an audition for Aeschylus, presented a more profound rendition of the characters than could ever be achieved by the sweat and skin of ‘real’ actors? If Star Trek is an idea, a big set of ideas, then the mode which presents the idea in its most abstracted sign-post form is surely the boldest and best and least adorned by the burdens of realism, content and reflection?

So, would it be so controversial not just to rebuke the naysayers, but to eschew the entirety of what is horribly called ‘The Franchise’ and stick our bold hope to the Trek that is most innocent, knowing, simple, complex, mournful and joyous of all?

And would it really be so very strange, my dear children, for whom I have waited — so lonely, so very lonely — 100,000 of your Earth years, to return to the Heart of the Galaxy, and immerse all eternity within an unbounded meditation upon Cartoon Star Trek, even as the last atoms shiver into dissociation and the universe casts forever upon blank absolutes of darkness unmeasured by a math silenced by The Forever Zero?

PS: In a nice bit of serendipity, here’s a brand-new short doing filmation on Star Trek: Voyager. And from earlier this year, here’s a Star Trek: The Next Generation version.