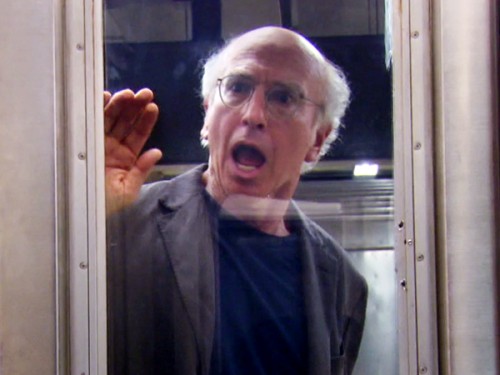 LARRY DAVID (born 1947), the Kurbist Kosmic Kvetcher, The Shmultimus Prime of Neurotic Observance, is the greatest exponent of The Over-Determined Judaic Annoyance-Response-Trouble Syndrome since Jesus. Angry at perceived slights from Romans and Pharisees, Jesus had run-ins with the local Currency Converters, recommended the “Second Cheek Slap” manoeuvre to his friends, and insisted, despite some evidence to the contrary, that wild lilies were of central relevance to the human condition. Sadly, it didn’t end so well. Its probably Moses’s fault, when he got the family lost in the wilderness for 40 years, because he had forgotten to bring the map but refused to ask for directions. This ensured that Jewish DNA was propagated by those males who secured the best camels, and who smartly addressed Camel Saddle Genital Crush Syndrome. Thus genetically endowed, Larry David’s character in Curb Your Enthusiasm provides a useful organizing principle for Jewish Angst that is very much the “Player” rather than the Woody Shnook. Famously, when a struggling stand-up, David got on stage, scoped the audience, and promptly departed, proffering a simple, grudging “Nah… .” “Just Say ‘Nah…’” is perhaps King David’s most profound lesson to us all.

On his or her birthday, HiLobrow irregularly pays tribute to one of our high-, low-, no-, or hilobrow heroes. Also born this date: Lindsay Lohan, Hermann Hesse.