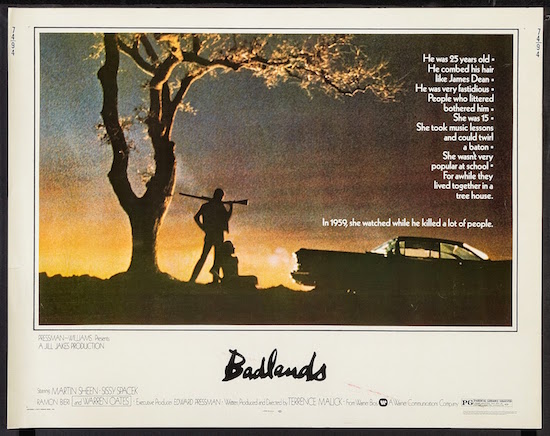 Say you killed someone, and felt like you might as well head off on a bloody road trip until you go out in a blaze. Say you want a pal along for the glory of the ride. You’ve got to choose well. Choose someone willing to take the impulse all the way out to the other side. In Badlands, Kit (Martin Sheen) kills for Holly (Sissy Spacek) and they head off into destiny.

One wonders: Did Kit pick the wrong girl?

Much has been made of the sexualized male gaze in film, and its more ethereal compatriot the female gaze. Badlands has both, perhaps. The camera watches Holly as she watches Kit. Kit watches himself. The narration is the female gaze, and at that an unreliable one.

But the gaze that interest me in Badlands is the “are you still with me, go for broke, it’s all unraveling so let’s toss caution to the wind and die together” look that precedes the climax. The “in it to the death” gaze. A look also contained in the first glance; predestined before the journey even begins.

That gaze heralds the climax of classic “buddy” crime films — Thelma looks to Louise, Butch Cassidy glances at the Sundance Kid, Bonnie’s eyes turn to Clyde, and the implicit “You ready?” is answered by “Hell, yeah!” The complicit death-wish gaze.

Before the climax of Badlands, Kit turns to Holly, yearning for her to return that look, knowing she won’t. She breaks the unspoken pact of the death-wish crime-buddy road film. He looks to her, and her look says “nope.”

While other buddy crime teams chase money, freedom or liberation, Holly is, as she says, “Just goin’ along.” Her father (Warren Oates) recognizes Kit’s type. His look says: How sharp is this blade pointed at my daughter? When Holly defies her father, he shoots her dog, and Kit shoots him. Holly exhibits signs of shock, yet she was a bit dissociated when we first met her, in her white shorts, twirling her baton.

There is no joy or glory in the murders Kit commits, nor in Holly’s blank response to them. Each death is as banal as a yanked tooth, each diminishing the smile of their romance. Holly’s interior hyper-romantic narration sours as things deteriorate. Is it a hindsight reminisce, to give herself plausible deniability?

Thelma and Louise’s car lifts over a canyon, the film stops before the car plummets. Butch and Sundance are frozen in a leap, a second before the rain of lead. Bonnie and Clyde are not given this gentle mythic treatment; instead we see the bullet-pocked corpses in a staccato loop. Near the end of Badlands, Holly is lifted in a helicopter, to go on to her fate — she is acquitted, her boyfriend Kit electrocuted, and she marries the son of her defense attorney, a happy ending she seems to have written for herself.

While Kit was busy writing his eulogy with each kill, Holly was busy spelling out “entire sentences with my tongue on the roof of my mouth, where nobody could read them.”

Did Kit choose the wrong girl? Or the right witness?