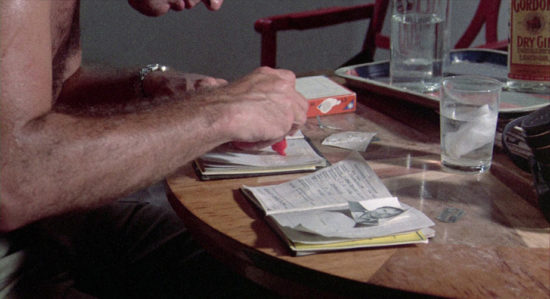 Do you ever stop and wonder what got you to this particular bend in the road? If a situation presented itself, an offer to change your life, would you take it? Get out of your own skin? You could try…

In The Passenger, television journalist David Locke (Jack Nicholson) wanders a desert town, trading cigarettes and vague glances in pursuit of a story about a rebel resistance. He heads out on a punishing desert chase which ends with his jeep stuck in sand. He stupidly grinds the engine, literally spinning his wheels and digging his own hole. With a gesture of epic futility, he beats the stuck tire with a shovel. Is he mad at the tire or sick of being himself?

When a sweaty Locke finally makes it to his hotel, hopeful of a shower, the porter informs him there’s no soap (of course there isn’t). Locke discovers that his drinking buddy, English businessman Robertson (Charles Mulvehill) dead in the room next door. Locke opens the dead man’s passport, realizes they resemble each other, and a door opens. Locke contemplates the corpse’s face, next to which lies an unfinished chess game.

A ceiling fan spins helplessly against the heat. A bug crawls up a wall. Antonioni’s camera lingers on the detritus of identification. Locke slips out of his own clothes and into Robertson’s life. As Locke switches his passport photo for Robertson’s, he listens to a tape of Robertson speaking, as if trying on his new voice. A desperate kind of hope emerges. The film’s meandering pace, which pauses to let a dog piss and a little girl blow a bubblegum bubble, lets the film breathe. That lingering is transfixing. As casually as pouring his next gin, Locke reports his own death.

Locke is handsome, smart, a celebrated journalist. How to parse the forensics of his self-annihilation? The film drops a few clues. A story is told of a blind man, who — when he could finally see — killed himself. Locke sneaks into his own home, sees his own obituary on his wife’s bed, along with a note from her lover. Has she anticipated his vanishing? It’s a litter of clues that don’t really add up.

Locke meets a young architecture student (Maria Schneider) and begins an affair, as if what he really wants is a witness to his inevitable demise. He recklessly keeps the dead man’s appointments with an arms smuggler, allowing his new fate to take him over. It’s random, with intent. As his wife says in the end, “I never really knew him.” It’s a line that seems to echo an earlier film, Bertolucci’s Last Tango in Paris, in which one of Marie Schneider’s last comments is: “I don’t even know his name.”

For most, a passport is just a necessary convenience. For Locke, who trafficks in innuendo, and is at home in inscrutable situations, a passport becomes a doorway, a way to offer himself up as another mystery.