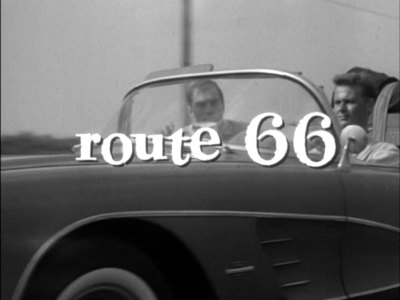 The actual highway, known as “The Mother Road,” “Main Street America,” and “The Will Rogers Highway,” dates from November 1926, long before the Eisenhower Interstate System that would militarize America with convoy-friendly pavement — as well as grant the world a nice typeface. Bobby Troup’s song, about getting kicks on the road that winds from Chicago to L.A., “more than two thousand miles all the way,” was released twenty years later as a swinging twelve-bar smooth blues by the Nat Cole Trio. When the Rolling Stones covered it in 1964 on their self-titled first album, after versions by (among others) Perry Como, the Andrews Sisters, Bing Crosby, and Chuck Berry, it was as close to American Standard as any song not composed on Tin Pan Alley.

But the TV series was, for many of us, the highway that’s the best. For 116 episodes between 1960 and 1964, this endless TV road trip set the standard for crew-cut cool. Martin Milner, playing footloose college graduate Tod Stiles seven years before Dustin Hoffman’s swimming-pool and hotel-room sojourn in Pasadena, tooled his gorgeous 1960 Corvette convertible from adventure to crime to psychodrama. He had two different sidekicks, Buz and Linc (George Maharis, Glenn Corbett). The producers wanted a series that spoke of youthful restlessness, pre-counter-culture disaffection. But Milner’s Tod is too buttoned-down, short-sleeved J. Press shirt, dungarees, and Bass Weejuns to radiate anything other than wholesome virtue. He’s the Kingston Trio, not the Rolling Stones. (Later fame came as a straight-laced LAPD cop on Adam-12 (1968-75).)

I watched the latter show in prime time, with my dad, but I had to catch up on Route 66 in the 1970s. Some polymath nerds at the local hobby shop, D&D aficionados and SCA weekend warriors, they knew everything. If they thought Route 66, 77 Sunset Strip, and the NHRA drags from Ontario Motor Speedway were hip, then so did I. It was all part of a California-of-the-mind in which I dwelt as a shy teenager in Winnipeg, Manitoba, building my Rat Fink plastic models from Revell and going to hot rod shows downtown. Not till much later did I appreciate the actual quality of Route 66, with its astonishing array of famous and not-yet-famous guest stars. Just a few names: Elizabeth Ashley, Ed Asner, James Caan, James Coburn, Joan Crawford, Robert Duvall, Anne Francis, Jack Lord, Lee Marvin, Walter Matthau, Julie Newmar, Leslie Nielsen, Suzanne Pleshette, Martin Sheen, Rod Steiger, William Shatner — and Robert Redford.

But, as Milner once said, the real star of the show was that sweet-ass Corvette, and the primal Kerouacian urge to hit the road. I still want to get in that car and go — anywhere, anywhere at all.

Fun fact: Milner beat out Robert Redford for the role of Tod, just as Hoffman would later be chosen over the young blond god for Mike Nichols’s classic 1967 film. Was Redford just too good-looking to be a plausible college boy?