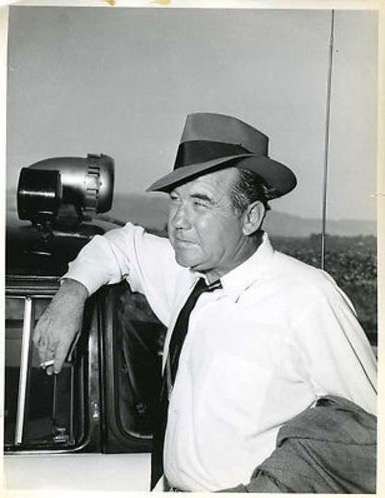 In a manic childhood, my days never ended, but I remember when TV’s did. Like crossing over the tip of the earth from 24-hour darkness to midnight sun, it would fascinate me to outlive the primetime communion populated by most of the country, and sit by the lantern which only the 9-to-5 era’s outliers would gather around. I wondered who could be watching, who these signals were sent out for — obscure musicals, forgotten sitcoms and dramas, insomniac conversations on politics or god. By the time Highway Patrol was set in motion to fill airspace between midnight and signoff on the local NBC outlet, it might as well have been a transmission from another world, a beacon activated for the inhabitants of an uncomprehending future. Its tabula rasa of unidentified roadways and its somnambulant pace mesmerized me; a mix of plodding progression and insistent inevitability perfectly formulated to keep an overstimulated small-screen orphan pacified, transfixed and just this side of the dream state.

Each of its 156 episodes (run several a night as an auto-pilot marathon in my market) follows a staunch detective played by Broderick Crawford, the show’s only regular character, disembodied from his best-actor Oscar a decade before to roam unnamed California highways in pursuit of fugitives, brigands and murderers. Low budgets, a desire to exalt highway patrols in an inclusive archetypal way, and the still-wild nature of much of the country in 1955 placed most of the action in an interstitial reality of anonymous, overgrown stretches of road. The trail-between was America’s true promised land, the path from glory to glory; once we got to the golden West, we eulogized the routes we’d taken, and for Beats during Highway Patrol’s run and hippies not much later, the trip became its own sole purpose.

At the same time Eisenhower was initiating the interstate highway system, making distance extinct. He wanted a quick way to move troops across the country should any war come home to us; the unintended benefit was a path of endless escape for those who didn’t feel like the winners of our last one and were all too conscious of how far horizons didn’t go — the mad ones, easy riders, outlaws of both unofficial reality and cinematic myth. The kind of people Crawford’s character was born to track down and keep in line. But he too was an unknown soldier, holding down the boundaries of civilization while banished to its outer edge, the frontier drawn in blacktop with the waves of nature closing in. Who was watching? He was, over all of us, and I was there to see he had.