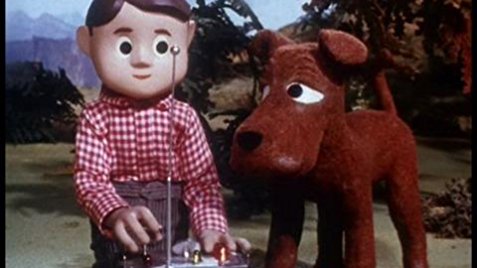 Sunday mornings in early-’80s Los Angeles, my brother and I would come home from Hebrew school, make Steak-Umm and cheese sandwiches on hoagie buns, and settle in in front of the TV for a round of “so help us God, we will watch whatever you air.”

Paired in repeats with Clokey’s more famous creation, The Gumby Show, Davey and Goliath had all the sophistication of a two-stroke engine — no wit, no winking irony, just simple, 15-minute parables about a boy and his dog-slash-superego. Storylines moved from point A to point B, with no detours or frills. Children spoke like Lutheran elders, not least because they were voiced by middle-aged adults. The stilted, jumpy Claymation had everyone’s arms hanging weirdly down to their knees. Honestly, it was like watching cave paintings.

Still, it was addictive. The themes were obvious but sweet – one week Davey might learn a tough lesson about leaving a nail from his go-cart repair in the path of his father’s car. Another week, he might discover that just because a kid has a spotted necktie is no reason to bully him. Often, the lesson boiled down to “really Davey, don’t be awful.” To his credit, he always learned that lesson with grace and good humor. To the show’s credit, it never felt preachy, even when the lessons were overtly Christian. It was like a kinder, gentler, TV version of a Chick tract, if Jack Chick had been a Lutheran, and not an asshole.

The show could never survive today — too many good choices. It’s a shame, too — some of those themes still feel fresh and relevant. Like that time an old shoe cobbler spoke French to Davey, and Davey tried to have him arrested. There was a God lesson in that one, too, and a good one. Would have gone great with Steak-Ummm.

See All Posts by Dan Reines

Dan Reines is a writer living on the grassy outskirts of Los Angeles, California.