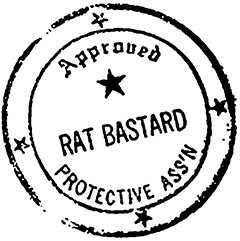 When Bruce Conner got off the plane from Wichita to San Francisco in the fall of 1957, the Beat thing had become a punchline. One enterprising North Beach café-owner even paid a painter to sit in the window in a beret and goatee. That painter’s name was Wally Hedrick, a fake Beat but a real artist. He lived in a house on Filmore with a group of other painters, artists and musicians, including his wife, Jay DeFeo.

People called the house Painterland. It was the first place Conner stayed after he got off that plane. While there, he sent out letters to a dozen friends, telling them they were members of something called the Rat Bastard Protective Association, and that dues were three dollars a year. They met once a month, and if you paid, you got to put the Rat Bastard seal on your work.

Conner was the only one to use the seal. But they did have meetings — once on a miserably cold night on the Golden Gate Bridge. And they had something resembling an aesthetic, or an ethos. Maybe they were even a movement. The name came from the San Francisco garbage collector’s union, the Scavenger’s Protective Association, and scavenging was the key to how Conner and his friends made their art. The Western Addition was being torn down all around them as part of the city’s urban renewal (or ‘Negro-Removal’, as James Baldwin nicknamed it) program. The Rat Bastards picked its bones for scrap. From it, they made sculptures, paintings, whirligigs, Christmas trees and installations. None of it sold. Most of it was ephemeral, or meant to be. Assemblage was the name of the game.

Conner, the rat-bastard-in-chief, made works he called his “rat bastards.” They were weird collections of materials — doll parts, cigar boxes, magazine cut-outs — glued and nailed together and then wrapped in torn nylon stockings. They look like roadkill or artifacts from the Upside-Down, but also dreams and fantasies no one wants to admit having. They make Surrealism seem soft and combines look mannered.

The Rat Bastard renaissance only lasted a few years. Conner’s works might have had the most staying power out of the group, but no work sums up the squad better than Joan Brown’s Fur Rat. It’s a sculpture of a giant rat which she made of wood, chicken wire, plaster, string, nails and raccoon fur. It’s almost more of a dog or a fox than a rat, but it’s a rat bastard to the core: fearless, inventive, not afraid to be a little gross. A wild beast rummaging in the corridors of art history, building a reality out of the scraps others had left behind.