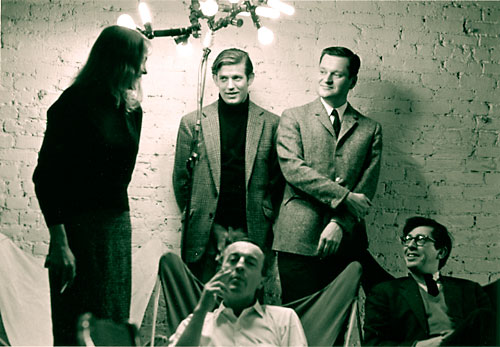 WHY I AM NOT A NEW YORK SCHOOL POET

I am not a New York School poet, I’m a rock
critic,
though I think I’d rather not be. Why? Well,
many days
as a young man, younger and more man
than I wished, I would go to the library on
Colborne Street
with a series of questions that were the
same question:
Where did this culture come from? This
meaning
the one I most cared about, with punk rock,
late-night TV,
David Lynch, comix zines in it, though I also
cared
about literature or jazz, e.g., which weren’t
much in it,
except by rare invitation. If you were a
young man
you mostly found out the answers were
drugs,
the Velvet Underground, the Weather
Underground, the
Beat Generation. If you were lucky maybe
someone told you John Cage.
(Dadaists and surrealists, bien sur,
but that’s over in the other place.)
Around when you were catching on
that Andy Warhol’s banana pulled more
weight
than John Cale’s viola, when you were not
as young a man, or if you never were a
man,
the Beat Generation would be making you
very tired,
in aggregate though not every particulate,
above all for the denouncing and
pronouncing, which
the Republicans later heard about, and
yelled GOOD IDEA.
Finally you found out, maybe from poems
copied for you
by a woman you loved who was smarter
than you,
about the New York School in the 1950s,
who were
John Ashbery, Frank O’Hara, James
Schuyler, and Kenneth Koch
(pronounced Coke like the coke-bottle
glasses). Optionally
also Barbara Guest, Joe Brainard, Ted
Berrigan,
and Bernadette Mayer, et al. All
indifferent to denouncing and
pronouncing, yet
(don’t tell the internet) not bored or evil
but rather so beautifully exhilarated about
having washed up
on Manhattan-which-was-still-Manhattan
from wherever
(who remembered?) on waves of splattered
paint. In “The Morning
of the Poem,” Schuyler told this story about
what it was like
for them to meet (I took the line indents
out, it was too much):
“When I first knew John Ashbery he slipped
me
one of his trick test questions (we were
looking at a window
full of knitted ribbon dresses): ‘I don’t think
James Joyce is any good: do you?’ Think,
what did I think! I
didn’t know you were allowed not to like
James
Joyce. The book I suppose is a masterpiece:
freedom of
choice is better. Thank you, ‘Little J.A. in a
Prospect of Flowers.’”
Joyce or no Joyce, their poems rejoice in
letting in
brows of all furrinesses and their friends
as characters (poetry will be sociable
or not at all!), and exclamation marks,
kangaroos and Cokes,
Kenneth or otherwise. If New Yorkers were
Dr. Seuss drawings,
or Lana Turner were Popeye, or cherubs
were epistemology,
Republicans never noticed and still don’t.
Women
were seldom props for William Tell
practice; mercy, some of the poets
were women, though more of their painter
friends were,
and returning to figuration. A few were
even heteros.
Granted, lots, whatever gender, were Ivy
League valedictorians
and track stars for Mineola Prep. There are
dodgy tales
about their dealings with LeRoi Jones, who
fled them
into the arms of Amiri Baraka. Still, in some
insane
time like 1952 or 1955 it seems they’d
already known
not only about late-night TV and comix
zines (collages!)
and that not as much literature would
follow, but also that queer
shoulders would get sprung from the
wheel. So they held
Stonewall some 15 years in advance, down
the hall
from Uncle Wystan Auden’s apartment (he
left early)
and celebrated all morning and mourned
all night.
They were so sad that they wrote about
happiness,
removing the transition between the two
so the straights couldn’t prosecute it. And
wrote novels together,
and ridiculous plays, very fast, that they
made
each other star in. (Oh, the punishment
theaters
now inflict for the crime of having written a
play! “Development”?
No, no. Do it like this.) They glowered drunk
at each other’s boy-and-girl-friends at
parties
but always went to the parties (or not at all)
and borrowed typewriters there, if they
weren’t over
in the other place, because Paris-which-
wasn’t-exactly-still-Paris
was their own time-travel destination. They
were the last pack
of poets who wanted to be painters,
instead of rock stars.
So if Frank O’Hara had lived past 40 (Fire
Island, dune buggy)
maybe he would have run a Factory
that built a better Brillo box. But I didn’t
come from that culture.
Even though now the palaces give my
beloved little J.A.
all the crackerjacks for being
still here, so wistful and so bereft of blood
relations.
I came from this culture (notice my
pronunciation),
where you can say James Joyce was bad all
day long
and nobody gets mad or exhilarated or
starts looking
at ribbon dresses. It’s called SARDINES.