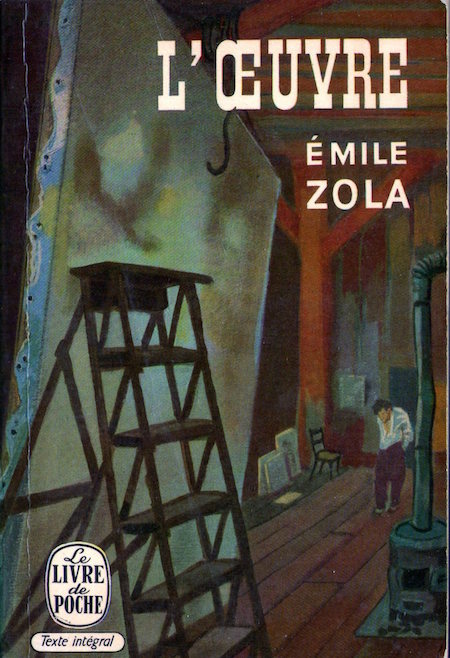 Early in The Masterpiece (serialized 1885–1886), the cocksure young painter Claude Lantier and his pals, all transplants from provincial Plassans who aspire to various artistic careers, “seem to take up the whole width” of a Parisian boulevard as they strut forth to a night of drunkenly predicting a creative revolution with themselves in the vanguard. “The gang usually spread out like that, as friends tacked themselves on to it until it looked like a horde on the war-path. As they squared their broad young shoulders, these twenty-year-olds took possession of the entire pavement. … Victory was theirs for certain.” The “gang,” Zola writes, is in “mad pursuit of their dreams of an artists’ Utopia.”

“Ah! This Paris! It’s ours!” Lantier declares. “All ours for the taking!”

“And we’ll take it,” his fellow art-gangster, a writer named Sandoz, adds.

“Of course we will!” the others agree.

Of course they won’t, and the details of their artistic ideas hardly matter. What matters is the exhilarating sense of possibility that binds them — no less genuine for all its naïveté. “The Plassans gang” stomps about “as if they wanted to conquer one district after another by flinging their startling theories in the face of its houses,” wallowing in the scorn of Paris’ establishment squares. “What does it matter,” Lantier cries, “if the public laughs? … After all, it really amounts to a victory.” Perceived as the gang’s leader, he’s already the subject of jealous whispers in the cafes where young artists gather, pointing at him “as if he were the chief of some terrible tribe of savages.”

At the risk of over-foreshadowing, Zola quickly and correctly informs us that part of the thrill is the certainty that this cannot last: “As yet nothing had come between them, neither their fundamental disparities, which they had not realized, nor the spirit of rivalry which was one day to set them at variance. The success of one, surely, meant success for them all!” The sole established artist that the gang admires sadly explains that it never gets better than this. “If only you knew how lucky you all are to be still at the bottom of the slope,” he says, but they ignore him, as they must.

Lantier was based in part on Paul Cézanne, Zola’s actual childhood friend. Along with their fellow son of a Plassans-like town, Baptistin Baille (eventually a professor), they were “les trois inséparables,” setting out to conquer Paris with their own “startling theories.” In The Masterpiece, only Sandoz, a laughably self-serving stand-in for Zola, emerges with his integrity, humanity, and psyche intact. The rest of the gang devolves into lives of back-stabbing, creative theft, selling out, personal and artistic treachery, humiliation, and abject failure — with Lantier destined for the most pathetic future of them all. Zola sent the book to Cézanne, who never spoke to him again.