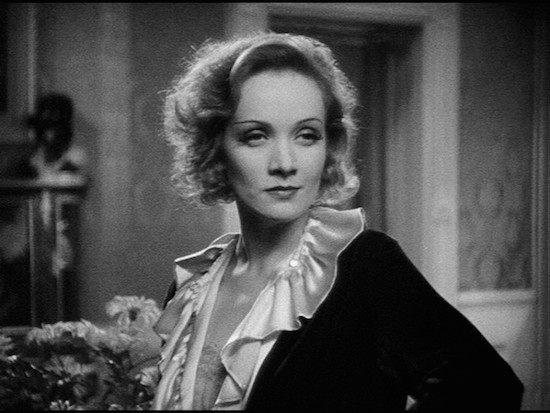 Marlene Dietrich and Mata Hari: it sounds so obvious once you say it. It didn’t take long for Josef von Sternberg to put the two together. But first he had to settle on the right Mata Hari. A mere fourteen years after her death, the details of her life had already been replaced by a mixture of ennobling legend and titillating anecdote. Like Joan of Arc before her, everything about her was up for grabs — especially her execution. The New Yorker’s Janet Flanner recorded three versions of the fateful day:

Legend states that she dressed for the occasion in a fine mink coat — over her nude dancer’s flesh. According to an American lady in whose Left Bank private garden she had once danced semi-nude, this is incorrect. She died wearing a neat Amazonian tailored suit, specially made for the occasion, and a pair of new white gloves.

The young French noble who, as officer of the day, was faced with the dreadful duty, afterward said that she stood so still that she made him tremble, when, his saber lifted in honor to one about to die, he gave the command, “Fire!”

Each account turns Mata Hari into the emblem of a different kind of woman: the unrepentant sexpot, the debonair androgyne, and the icy-veined enigma. The range between those three coincides pretty neatly with the roles Sternberg created for Marlene Dietrich in his years as her svengali, starmaker and spurned lover. (And come to think of it, isn’t the white tuxedo from the story the same one Dietrich wore in Blonde Venus?)

Sternberg never approved of Dishonored as a title. He wanted to call it after his fictional spy’s code name (X-27 to Mata Hari’s H-21), since, as he explained, the “lady spy was not dishonored but killed by a firing squad.” His insistence that she was a “lady” is significant, given that Dietrich (as Marie Kolverer) starts the film as a streetwalker, and that we see her rolling up her stockings, the working girl’s all-call, before we see her face, but in Sternberg’s universe it makes total sense. Marie is a war widow; she uses her sex appeal to survive. It will also make her an excellent spy — that, and her indifference to death. An Austrian spymaster (Gustav von Seyffertitz, deliciously Teutonic in a mackintosh and walrus mustache) recruits Marie at the scene of another prostitute’s suicide, after she announces that “I am not afraid of life… I am not afraid of death, either.” The determined cool with which she says it sums up something that links all the roles Dietrich played for Sternberg, from Amy Jolly to Concha Perez: a kind of feminine Bushidō in which the opposing pulls of sex and death resolve into a life of consummate style.

Maybe it was for the sake of this style that Sternberg moved the story from Paris to Vienna, which he imagined as an erotic hothouse out of Schnitzler, full of opulent balls and polished officers, and of a piece with his Morocco and Seville. But why did he need to imagine? He spent half his childhood in Vienna, and his father Moses, the bully, was a soldier in the Austrian Imperial Army. Maybe that’s what Vienna became after he returned to America, the glittering opposite of Jamaica, Queens, or maybe he knew that wherever he put Dietrich required a certain tone.

After a short debriefing in Seyffertitz’s palace laboratory, Dietrich goes to work, but she doesn’t need any of the old campaigner’s vials or beakers. Spying is mostly a question of flirting, and no one flirts better than Marie Kolverer. On her first assignment (at a ball, naturally), she gives a quick master class on seduction by confetti and noisemaker. Her target — an even oiler-than-usual Warner Oland — soon succumbs. It only takes a little piano music and some sexy cigarette smoking to implicate Warner in high treason. “What a charming evening we could have had, if you were not a spy, and I, a traitor” he tells her before shooting himself.

Before long, Marie is working behind Russian lines, disguised as a Polish maid. Wearing four layers of dirndl and spinning like a dervish she soon has a Russian general on his back. She slips away by plane and wins a few of divisions for Austria. She is triumphant, talented and reckless: it can’t be prudent to travel everywhere with a tell-tale fat black pussycat.

Marie’s rival and love interest, agent Kranau (played by Victor McLaglen in a role originally offered to Gary Cooper) may be the oddest thing in the film. He wears a pencil mustache and a constant, rictus-like smile, which I take on faith is meant to signify ‘charm’ and not some kind of muscular palsy. Though the passage of time has made him look like a simp, it’s almost beside the point; Dietrich always had to choose inferiors to be her equals. 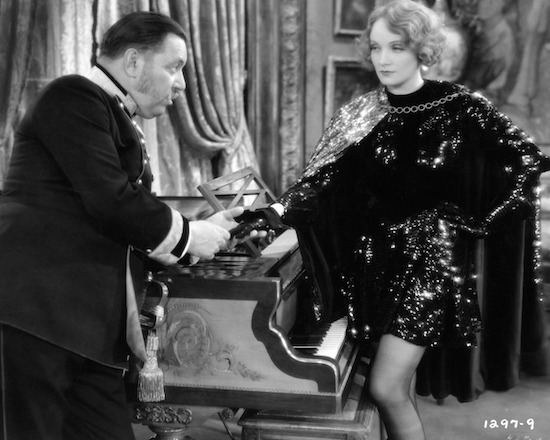 At the end we’re left to wonder why she throws her life away. All she offers to the panel of Austrian officers interrogating her is “I suppose I’m not much good,” but there’s more to it than that.

All of the Dietrich/Sternberg movies are about women who cannot be changed or change themselves. The drama in them comes either from the men around Dietrich, who have to learn that she can’t be bought, shriven or tamed, or from Dietrich’s own need to accept what she is. They are not about damnation and they are not about redemption, and they all end with Dietrich as the same person she was at the beginning (except maybe Scarlet Empress, but that depends on what you think of the little girl on the swing).

Think of Shanghai Lily on the train platform at the end of the Shanghai Express, or Helen Jones by the bathtub in Blonde Venus; both of them back where they started. It’s up to the men to change. Clive Brooks must know what he’s in for as Dietrich plays with his watchstrap and scans the room with coquettish eyes; what matters is that he doesn’t care.

In Dishonored, it’s up to Dietrich to learn not to care, at least about the big things. Before her execution, Marie plays a little piano in prison and passes her pussycat off to a Padre. She goes out in front of the firing squad in a fur-trimmed jacket and cloche feather hat, looking just as blasé as Amy Jolly when she steps on to nightclub stage in Morocco. Just before she’s shot, a young officer snaps and gives an impromptu speech about war as slaughter and refusing to kill women. Marie takes the occasion to fix her lipstick and adjust her stockings.

At the end when she’s dead in the snow everyone files out, and it’s left to von Seyffertitz, the spymaster and talent scout, Dietrich’s lone confidante and Sternberg’s clear stand-in, to give a final, weary salute.