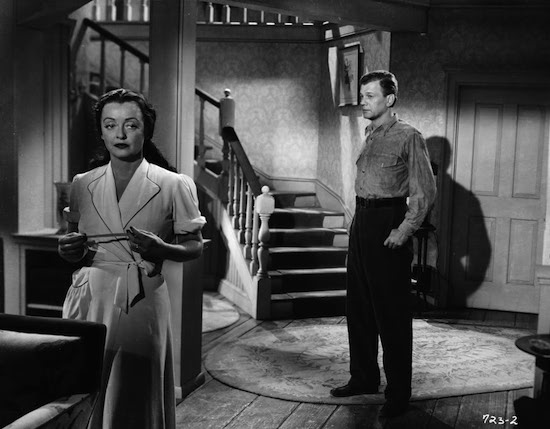 In America, the tagline read “Nobody’s As Good As Bette When She’s Bad.” In French they simply called it La Garce, ‘the bitch.’

They were on to something. Bette Davis’ character, Rosa Moline, is just about the most hissable woman ever put on screen in film, right up there with Ann Blyth’s Veda from Mildred Pierce and Faye Dunaway’s Joan Crawford from Mommie Dearest. She’s of a piece with the rest of the movie, a work of unrestrained woman-hating, city-fearing malignity. No other American film expresses such outright hatred of urbanity, femininity and fashion.

Beyond the Forest is a movie that doesn’t seem to come from the fringes of an industry but from the mainstream of another dimension. Specifically, the dimension imagined by Philip Roth in The Plot Against America, in which Charles Lindbergh wins the 1940 elections and inaugurates a Republican dictatorship. I imagine Will Hays as Secretary of Culture and Public Virtue, screening it for a group of party bigwigs as part of the rollout for the American version of ‘Kirche, Kinder, Kuchen,’ (Church, Kids and Cherry Pie!).

For all that Beyond the Forest is some kind of work of art, maybe the closest Hollywood has come to filming an all-American Medea. If the above scenario were true, we’d be discussing King Vidor’s collaborationism and using a razor to separate out the despicable content from the brilliant execution, the way we do with Leni Riefenstahl.

Bette Davis herself called Beyond the Forest a “terrible movie” and let everyone know it. Her last movie under contract for Warner Brothers, she walked off the set three times. She clearly thought the film was an insult, and who could blame her? The movie opens with the words, ‘This is the story of evil,’ before cutting to her in court. But if Davis was only acting under duress, it doesn’t show. She walks through the movie like a panther tugging at its leash. By her side, Joseph Cotten, playing Rosa’s milquetoast husband Louis, looks like a cup of cottage cheese.

Rosa and Louis live in Loyalton, Wisconsin, a mill town whose population of rachitic Scandinavians represents everything good and pure about American life. Surrounded by the tall firs of the northern woods, the town looks like the set of a German Expressionist film about damnation. The saw mill looms over everything. Its whistle drives the townspeople out of their beds in the morning. At night, their sleep is disturbed by the mill’s incinerator, a huge coffee kettle which opens every so often to deliver a reproachful blast of hellfire — a warning to the insomniac sinners huddled at its base.

Louis and Rosa have the nicest house in town, the farthest away from the incinerator, with gabled roofs and an Indian maid to pick up after them. Louis, the town doctor, ministers to his fellow citizens’ illnesses on credit. Rosa walks through them in a flamenco skirt, registering her contempt with little flicks of her long black hair, a Gypsy mane that belongs in the Valhalla of great movie wigs, next to Samuel L. Jackson’s rat-/pony-tail from Jackie Brown. She looks sexy and haggard, one part Bizet’s Carmen to two parts Marlene Dietrich’s cantina fortune teller from Touch of Evil.

Rosa longs for the big city, so much that life in Loyalton makes her ill. It sickens her to serve her know-nothing neighbors dinner or to stand in line amidst the gingham dresses at the post office. As to the thought of children with Louis, well, that just makes her flesh crawl. And meanwhile, every day the Northern railway rolls through town, its engine delivering a whistle blast which sounds like the serpent, whispering: ‘Chicago — Chicago.’

To Rosa Moline it sounds like a love song. She wants everything “deluxe” and anything that stands between her and Michigan Avenue is liable to get hurt. So is anything she simply doesn’t like.

Right at the start, Rosa shoots a porcupine out of a tree, just because it’s alive. Next, she makes an old recovered alcoholic fall off the wagon so she can seduce a fat-cat industrialist in the next hunting lodge over. She then extorts Louis’ back fees from his destitute patients (in potatoes) so she can run off to Chicago, which Vidor films as a tableau of leering drunks and streetwalkers out of a George Grosz print. 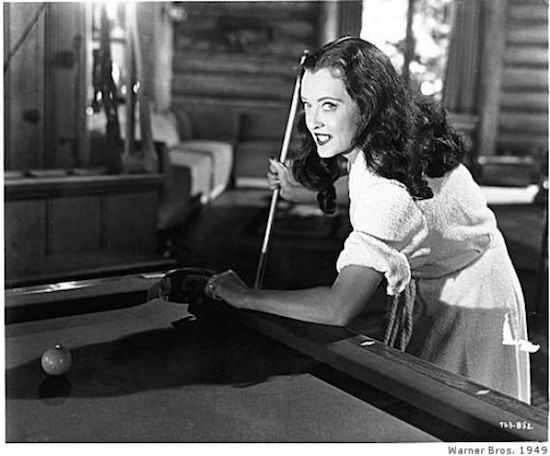 When the industrialist won’t agree to marry her, Rosa tries to blackmail him, and when that doesn’t work, she shoots his friend during a hunting trip and beats the murder rap by pretending it was an accident. Rosa then tries to run away again and fails. In a moment of despair, she lets her husband sleep with her. The pregnancy that results feels like a death sentence; to escape it she throws herself down a roadside chasm. And through it all, she finds time to be mean to her maid, who seems as if she’s wandered in from a stage production of Blackboard Jungle; their vicious repartee may be the nastiest thing in the film.

At the end of the movie, Rosa is dying of fever and still trying to escape. Under the glowing eye of the incinerator she drags herself towards the station a last time. Crawling on her hands and knees, she sings, “Chicago, Chicago, that toddling town” and dies face down in the mud. Rosa’s death is even more brutal and cynical than the arsenic at the end of Madame Bovary. The camera gloats over her dead body for a moment at the end, just so we get the idea that this is just punishment, and not a trick of fate.

The first time I saw Beyond the Forest this seemed like a relief, for Rosa and for me. But then I started to wonder just what she had done to deserve this end and that business about ‘evil’ in the beginning.

Sure she’s a murderer, an adulteress and a snob, but at heart all she wanted was freedom — freedom from drudgery, freedom from routine, freedom from reproduction. It’s her desires that threaten Loyalton, needs which, if they caught on, might have people fleeing that big incinerator in the sky.

Watching it again, I had come around to feeling sympathy for Rosa, but watching it I felt something different, a pang of recognition. That rifle, that smirk, the smolder, the sense of escaping imprisonment at all cost — she was Sarah Palin. Today’s Rosa Moline would treat her lack of sophistication as a resource and her isolation as a launching pad.

Poor Rosa. If only she had been born a few decades later. With her determination, country doctor husband and small town prettiest-girl-in-high-school credibility she would have killed. All she’d need is a little luck, and maybe a pair of designer glasses and a few decent suits; even if she didn’t win the nomination, it’d be better than dying in the mud.