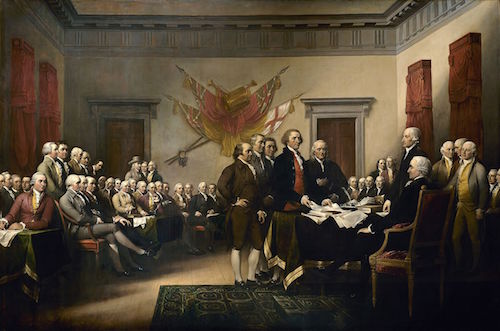 In the last moments of the constitutional convention in 1787, Benjamin Franklin was heard by James Madison to say, “When you assemble a number of men to have the advantage of their joint wisdom, you inevitably assemble with those men, all their prejudices, their passions, their errors of opinion, their local interests, and their selfish views.”

I’m not sure this goes far enough.

I love a misfit crew; and in the ur-misfit crew story, what they’re bringing to the enterprise is not first their gifts, but rather, their deficits. That which hobbles them becomes, in the fullness of time, their superpower.

Ladies and gentlemen, the Founding Fathers, in the hour when their enterprise is at its gravest risk. If they were a properly constituted misfit crew, it is their eccentricities, rather than their prescience, that will stand between us and our darkest hour.

Every crew needs a rage monster, to tap into those feats man is only capable of when the frontal lobe is disengaged. George Washington was our Hulk. General Scott said of the battle of Monmouth, “He swore that day till the leaves shook on the trees. Charming! Delightful! Never have I enjoyed such swearing before or since. Sir, on that memorable day he swore like an angel from heaven!”

Thomas Jefferson was the Cyrano character — his eloquence, for all that we benefit from it, the flipside of a crippling social anxiety. He spoke aloud only when avoiding it was impossible. All that passion, all the unexpressed moments of improvisation, shoved back down into his consecrated throat, only to find expression in his writing.

Because of a personal aversion to water, Benjamin Franklin preferred to bathe in cold air. He sat naked in front of the open window each day. Brothers and sisters, he stank. But like the Gremlin Gizmo, he was deemed worth it.

General Charles Lee traveled with a pack of dogs and was always in their company. He commanded their devotion. This hobbled his social and political life in all the ways you might imagine, but his dogs were needed in the fray. General Charles Lee, Dog Man.

Alexander Hamilton was a master manipulator of the Walter White model. John Adams, a misanthrope of the Prince Namor type, habitually pressed into service despite himself. John Jay, on the other hand, was a bit more like the Doom Patrol. He loathed his powers, and had no desire to be a Justice. “Hail to the Chief” was written for James Madison because no one noticed when he entered a room — and this to me seems a matchless power.

The only natural revolutionary among them was Thomas Paine, a man devoured not only by his own revolution but by the one in France. He had a tireless desire to upend institutions, and died widely reviled as a “rabble-rouser.” But a misfit crew, in the end, is only as powerful as the ordinary citizens it can inspire, and inspiring the masses was Tom Paine’s jam.

Go ahead and wrap yourself in the Constitution as our republic crumbles. I get that. But I’m thinking it will be human frailty that saves us in the end.