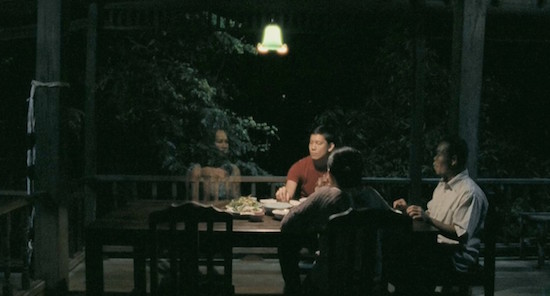 Uncle Boonmee Who Can Recall His Past Lives (2010), dir. Apichatpong Weerasethakul. This essay originally appeared in Bright Lights Film Journal.

Apichatpong Weerasethakul’s latest film, Uncle Boonmee Who Can Recall His Past Lives, the winner of this year’s Palme d’Or at Cannes, is a lush and laid-back drama about death and reincarnation. It’s several other things as well, depending on where you look. Take one image from the film at random — a dying man on his sickbed cradled by the ghost of his dead wife — and the movie is a gentle ghost story told to the sedate rhythms of life in the Thai countryside. Take another — a still photo of a time-travelling ape man on a leash, captured by gun-toting soldiers at some point in the future — and it becomes something completely different: a wild pastiche of genres and styles, a meditation on the history of Thai cinema, a collage in which science fiction and Buddhist teaching sit side by side while snatches of pop music and sounds of the tropical night play in the background.

Many things seem mysterious in Uncle Boonmee, but nothing reads as a flourish. Place and inner conviction hold everything together. Along with Syndromes and a Century (2006), Boonmee establishes Weerasethakul as our reigning master of the spiritual style: no one else moves across the lines that separate animals from humans and the living from the dead with greater ease or less fuss. 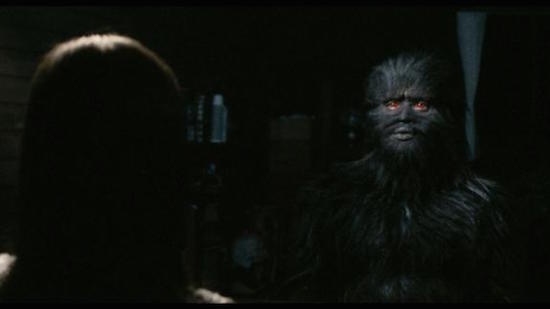 The Uncle Boonmee of the title is a farmer in late middle-age, slowly dying of kidney disease. As the movie opens, his nephew Tong and sister-in-law Jen arrive at his tamarind plantation in northeastern Thailand. While they eat dinner together, the ghost of Boonmee’s dead wife Huay materializes at the table. Soon thereafter, a creature comes up the stairs — a coal-black monkey-man with glowing red eyes. From the sound of his voice, Jen recognizes it as Boonmee’s son Boonsong, who disappeared several years before. In a hushed voice, Boonsong explains that he had become fascinated by stories of the monkey-ghosts, and that in the process of stalking them with his camera he learned their language and transformed into one of them.

And then the dinner continues. The quintet — the sick man, his relatives, the humanoid, and the ghost — share food and conversation with perfect calm and gentility. In its quiet way, this is breathtaking. Tong turns off the lights to spare Boonsong’s sensitive eyes and Boonmee brings out an album to show his wife the new beehives he has installed on the farm per her request. Boonmee’s courtesy is crucial here. It extends from his treatment of his Laotian workers to the design of his farm to his regard for insect life, and it serves as a binding agent holding together the disparate elements that make up the film.

Weerasethakul’s work is founded on a kind of deep politeness which extends past the human community into the world of animals and spirits. This respectful distance allows him to speak to beasts and summon the dead and without histrionics, dread, or metaphysical angst. His films are rooted in their natural environment — like the rest of the Primitive Cycle, Uncle Boonmee takes place wholly in the jungles and conical hills of Thailand’s Isaan region. But unlike, say, Terrence Malick who shoots forests as if they were cathedrals, with humans as ignorant tourists leaving crumbs between the pews, or Andrei Tarkovsky, in whose films wetlands and bogs are reservoirs of materialized transcendence, for Weerasethakul, nature is never a church or antidote to the fallen world of man. The line between nature and culture is always more of a continuum than a boundary — the few steps that separate the haunted jungle from the paddy fields which a water buffalo crosses in the opening shot.

Giving a full account of Uncle Boonmee would require grounding the film in the traditions of Thai cinema, the folklore of Northern Thailand, the history of the Communist insurgency in Nabua (where Boonmee was filmed), the theology of Theravada Buddhism, and the influence of American avant-garde filmmakers like Bruce Baillie. Even then, I doubt whether everything would resolve into a neat package. In interviews, Weerasethakul has said that he shot six reels of film, and that each reel corresponds to a different cinematic genre. I don’t know if I caught them all, but at the very least there is a monster movie, a science fiction short in the style of Chris Marker, and a historical costume drama set in Thai antiquity.

The costume drama episode concerns a princess and a magic pool. The princess is disfigured by a scar on her face. Gazing into the pool, she sees herself unblemished. A talking catfish promises he can make her so in real life. She enters the pool, and the catfish, instead of making her scar go away, has sex with her. She then transforms into a fish herself, and gives birth to a brood of baby catfish. Later, the ghost of Boonmee’s wife leads him to the same grotto, which he calls a womb, and the camera pauses over a cluster of albino fish in the cave stream.

I don’t know how any of relates to Thai myth, or whether we are witnessing Boonmee’s former incarnation as a princess (or fish). I can say that the final image of the sequence — a gorgeous full-screen shot of swirling turquoise-blue water, alive with turbulence and fishtails — serves as an icon of a world in constant flux, and that when Boonmee dies in the same cavern, the motif of rebirth and transmutation is once again given concrete embodiment. 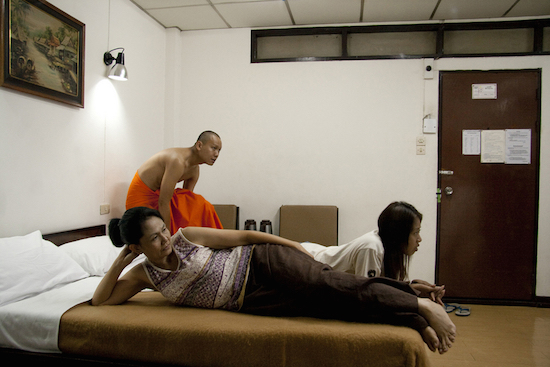 Something equally mysterious occurs at the end of the film. Boonmee’s funeral has already taken place. His sister-in-law and her daughter are tallying condolence gifts from the mourners when nephew Tong comes to their room in his saffron monk’s robes. He takes a shower and suggests they get something to eat, but instead the three of them sit down on the bed to watch TV. At this point, Jen and Tong go out anyway, for a meal at a neon-filled karaoke bar — leaving their bodies in the hotel room behind them, but somehow inhabiting them at the same time.

Does this mean that our own souls are out wandering while we watch Weerasethakul’s movie? Or does it mean that the next world is much closer to this one than we realize, and that we don’t even need to wait for death to reach it? In either case, it’s a moment that’s emblematic of Weereasethakul’s art, in which the possibilities of spiritual life are always rooted in a generous embrace of the physical world. Who else would think to picture the journey to the afterlife as a drowsy trip to the hotel lobby?