Melancholia, Lars von Trier’s new apocalyptic parlor drama, is a depressive’s feast, a vision of the end of the world as mercy killing. It is about suicidal depression and the end of the world, and about how one can work as a cure for the other. The title refers both to the condition suffered by the film’s protagonist, Justine, played by Kirsten Dunst, and to a planet on a collision course with Earth.

This overlap is no coincidence. In Melancholia, macrocosm always equals microcosm: Kirsten Dunst’s mental state is quite literally the condition of the universe. But, in true von Trier fashion, the title is also a joke about solipsism, good for a sour little chuckle while the world burns.

The planet itself is one of the best things in the movie. In the first half, it appears as a distant star. Gradually, it gets closer and closer, growing into a giant blue orb whose skies are dotted with little white clouds. It hangs in the night sky like a malevolent moon, getting larger and larger until it fills up the entire horizon above the Swedish castle-cum-golf course where von Trier has set his tale, leaving no doubt about the inevitability of the final impact. 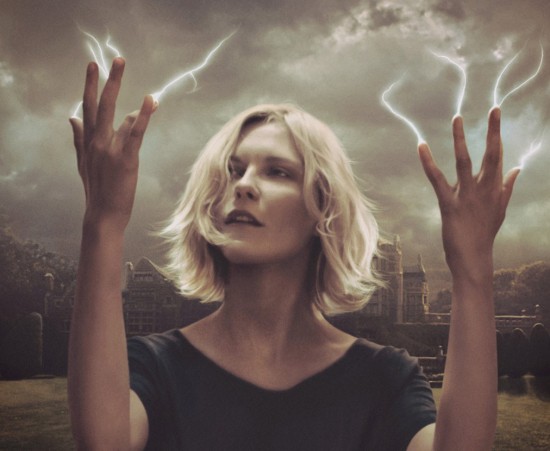 Not that the end is ever in doubt. Melancholia begins at the ending, with the death of Earth. It starts with a close-up of Justine, weeping exultantly while being pelted with dead birds. Elsewhere, a horse falls to the ground in slow motion, while figures in formal wedding attire march slowly across the chateau’s manicured lawn. Soon blue tendrils of electricity are shooting out of Justine’s hands, while in space, the two planets brush against each other and embrace to the sound of the Liebestod section of the overture to Wagner’s Tristan and Isolde.

This prologue is a brilliantly perverse set piece, whose weird bombast is at once comic and chilling, but it’s hard to know how to take it. The whole thing feels like it could be Von Trier’s mordant answer-track to Terence Malick’s rapturous stargazing in The Tree of Life, chaos against creation, proof that death and destruction make as good objects for aesthetic contemplation as birth and evolution. If Malick’s film drank deeply from Emerson’s Over-soul and Whitman’s Leaves of Grass, then Von Trier’s biggest debt is to the angstiest regions of German Romanticism. The two directors’ philosophies permeate their films down to the lighting: Malick’s is all autumnal sunshine and late-evening radiance, while von Trier films everything in a moody, moonlit swoon. 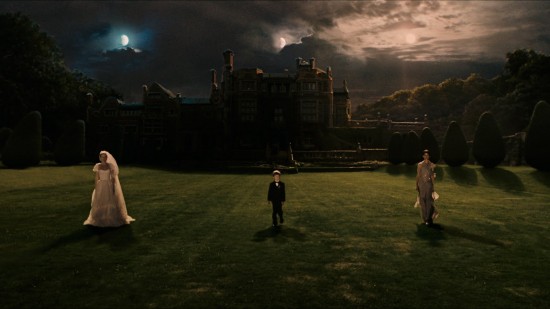 It’s strange, in the second decade of the 21st century, to see two 19th century worldviews do battle. While Malick seems to come by his transcendentalism honestly, for von Trier, Romanticism seems like a pose (he admitted as much in the course of the interview in the course of which he compared himself to Hitler, leading to his expulsion from Cannes). And this makes all the elaborate visual trappings of Melancholia — the enveloping mists and windswept coasts ripped from Caspar David Friedrich paintings, the horses galloping through the fog and the castle borrowed from Cries and Whispers – feel like a put-on, as if to say ‘You think this is beautiful? The Nazis thought so too.’ Even the pessimism feels forced, like the misogyny in Antichrist (the credits for Antichrist mentioned a misogyny consultant; I’m not sure if Melancholia had an eschatology advisor.)

Disingenuous or not, the apocalypse that bookends Melancholia at least dazzles. Schopenhauer was right: like flaming airships and late-season collapses, cosmic catastrophes really do bring man in contact with the fullest feeling of the sublime. Sadly, the rest of Melancholia is a misanthropic slog. The bulk of the film is taken up with a disastrous wedding and its aftermath. Justine is getting married to Michael (Alexander Skarsgård). Her sister, Claire (Charlotte Gainsbourg) and her extremely wealthy husband John (Kiefer Sutherland, impossibly smug) throw her a lavish party for which they expect her to be effusively grateful, and even worse, happy.

Things go wrong from the outset. Justine and Michael arrive late. The hosts are impatient and the wedding planner (Udo Kier) won’t even look at the bride out of rage. Justine’s parents are impossible: her father (John Hurt) is an irresponsible fool, desperate to be liked, and her mother (a ferocious Charlotte Rampling) is cynical to the point of mania. Justine absents herself from the proceedings as much as she can, lolling in the bathtub, hanging out with the horses in the stable, sleeping in her room, but despite her best efforts the night gets more and more mortifying. Her sister is furious with her for being depressed, her brother-in-law for being ungrateful, and her boss (the oleaginous Stellan Skarsgård) is on hand to needle her about a tag line for an advertising campaign. With the addition of excess drinking and extramarital sex, the reception blossoms into a true social disaster. 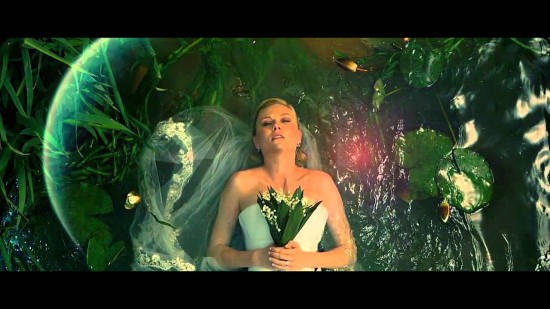 At the wedding, Justine seems in the grip of an overpowering ennui, but when she returns to her sister’s house in the second act after a few weeks, she’s in the grip of full-blown clinical depression. She’s nearly catatonic, unable to eat or bathe unassisted. Claire treats her with a mixture of tenderness and frustration that feels wholly genuine. For a moment, von Trier lets his defenses drop. He stops playing Holden Caulfield, smoking out the phonies, and shows depression for what it is, an illness, and not a heightened form of self-consciousness or sardonic social awareness.

Apparently, the germ of the idea for Melancholia came to von Trier from his therapist, who mentioned that pessimists have an easier time of dealing with catastrophe because they’re less surprised by the idea that the universe might be trying to kill them. The movie’s ending elevates this dubious insight to the level of allegory. As Melancholia the planet gets larger and larger in the sky, Justine starts to recover. The end of the world works like a kind of homeopathic cure — a pinch of poison to cure the disease. Suddenly, Justine is playing with her nephew and moon-bathing in the nude. She even makes a little teepee to welcome the falling stars, while in the background Claire weeps into her Google searches and John bumbles with his telescope. Von Trier’s message is clear: futile empathy and useless reason fall helpless before hard-nosed, clear-eyed negativity.

Wouldn’t that be nice? But Von Trier isn’t quite the skeptic he seems to think he is. Like most of his movies, Melancholia tries to have it both ways: believing in redemption through suffering while denying its possibility to all but a select few. There’s a dose of wish-fulfillment too: the yearning of a Wagnerian adolescent who wishes that the universe conformed to his emotions so that the world could know his pain. When Justine announces that “life is only on Earth, and not for long,” it’s supposed to be a prophecy; out of her lips, it sounds more like a prayer.