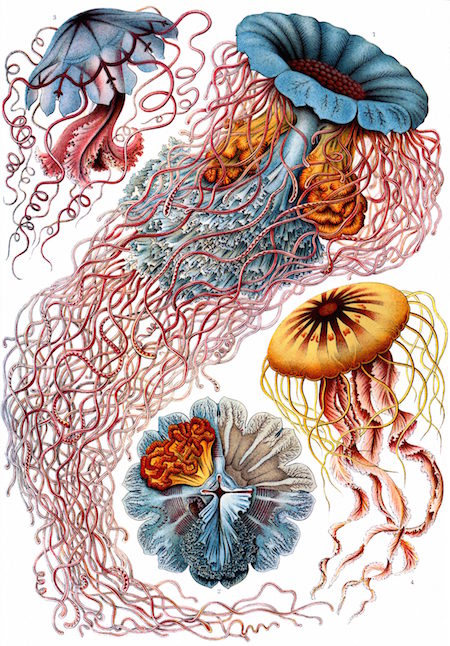 ERNST HAECKEL (1834–1919) devoted his life to advancing the cause of evolution — through science, through art, and sometimes, through outright mystification. Haeckel studied to be a doctor, then toyed with the idea of becoming a landscape painter before leaving Germany for Italy, where he pursued zoology. Taking the death of his first wife as evidence that religion is a farce, he devoted himself to proving Darwin’s theories. Sometimes he did this through meticulous observation: At his home base in Jena, the Villa Medusa, Haeckel catalogued thousands of species of marine invertebrates, coined the word ecology, and invented the evolutionary tree. Often though, Haeckel’s informed predictions were mixed with wild speculation. Sometimes, as when he prophesied the discovery of Java Man, his guesses were borne out. His argument that ontogeny recapitulates phylogeny, however, rested on flawed evidence; his views on the separate evolution of human races became a cornerstone of scientific racism; and his proposed missing link between organic and inorganic matter, the Urschleim, turned out to be nothing more than mud from the ocean floor. Today, Haeckel is best remembered for his art — above all, for that masterpiece of biological psychedelia, Art Forms in Nature (1899-1904). For Haeckel, the endless symmetries and resemblances in Nature never lost the power to entrance and amaze – or to lift him up after tragedy. After one of his lovers died of a morphine overdose, Haeckel named a species of jellyfish after her. Its tentacles reminded him of her golden hair.

On his or her birthday, HiLobrow irregularly pays tribute to one of our high-, low-, no-, or hilobrow heroes. Also born this date: Iain Banks, Gene Pitney.